ANGOLA, Ind. – Trine University is pleased to announce that Stuart D. Jones, Ph.D., vice president for enrollment management, is one of 23 senior-level administrators in higher education nationwide selected by the Council of Independent Colleges (CIC) to participate in a year-long Executive Leadership Academy. 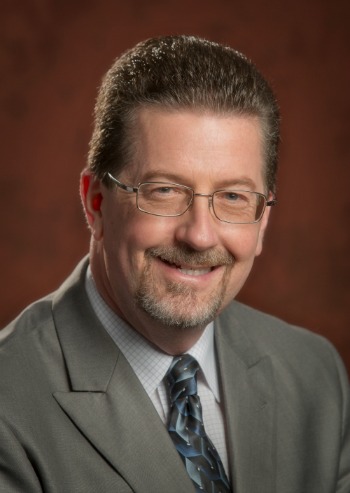 Individuals chosen for the program are vice presidents or cabinet officers in higher education who aspire to the presidency of an independent college or university. Jones will participate in two seminars held in Washington, DC, as well as readings, webinars, and a mentoring program. In addition, he will develop an experiential learning plan focused on specific areas of presidential responsibility.

Jones, a Lafayette, Ind., native with 20 years of experience in higher education, joined Trine in June 2013.

Jones holds a Doctor of Philosophy degree from Northcentral University in Prescott Valley, Ariz., where he studied education with an emphasis in higher education leadership. He holds a Master of Arts in divinity and theology from Christian Theological Seminary, Indianapolis, and a Bachelor of Arts in interpersonal and public communications from Purdue University, West Lafayette, Ind.

The purpose of the Academy is to prepare provosts and vice presidents to serve as effective college presidents. "Competition for the available places in the program was intense," said Richard Ekman, CIC president. "The review committee found the nomination materials to be most impressive. They (and I) believe that Stuart has the potential for highly effective leadership as a college or university president."

"Stuart brings vision and energy as he leads Trine's admission and enrollment team," said Earl D. Brooks II, Ph.D., Trine president. "His bold and dynamic leadership style has helped Trine maintain its enrollment success. I'm confident of his skills and am proud that he's been selected for such an engaging program."

Since the program began in the 2009–2010 academic year, several vice presidents have become presidents. "These indicators suggest that CIC is helping to meet the leadership needs of higher education by offering highly effective leadership development programs for modest fees to member institutions," Ekman said.

The Academy is co-sponsored by CIC, the American Academic Leadership Institute (AALI), and the American Association of State Colleges and Universities with financial support from Academic Search, Inc. and the Henry Luce Foundation. Tom Kepple, president of AALI and president emeritus of Juniata College (PA), is the program director.

For more information about the Executive Leadership Academy, visit www.cic.edu/ExecutiveLeadershipAcademy.

The Council of Independent Colleges is an association of 744 nonprofit independent colleges and universities and higher education affiliates and organizations that has worked since 1956 to support college and university leadership, advance institutional excellence, and enhance public understanding of private higher education's contributions to society. CIC is the major national organization that focuses on providing services to leaders of independent colleges and universities as well as conferences, seminars, and other programs that help institutions to improve educational quality, administrative and financial performance, and institutional visibility. CIC also provides support to state fundraising associations that organize programs and generate contributions for private colleges and universities. The Council is headquartered at One Dupont Circle in Washington, DC.

The American Academic Leadership Institute provides leadership identification and development programs across all sectors of public and private higher education. AALI creates and implements programs and assistance for academic leaders in various administrative positions enabling them to be successful in their roles and to advance the institutions they serve. In addition, AALI supports research and publications and consults with academic leaders and boards of trustees concerning traditional and emerging issues facing higher education and its governance. Headquartered in Washington, DC, AALI and its predecessor organizations have participated in the advancement of higher education for over 30 years. A subsidiary of AALI, Academic Search Inc. (ASI), one of the nation's premier search firms since 1976, provides significant funds each year to support AALI leadership development programs. The ASI subsidy allows AALI programs to be offered at a comparatively low price.