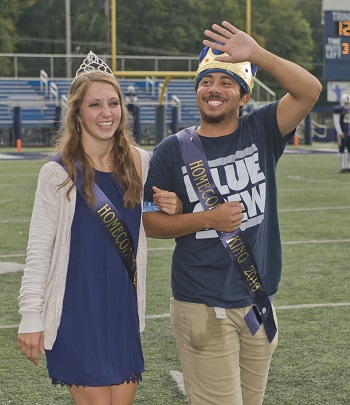 The 2016 Trine University homecoming king and queen were crowned Friday, Sept. 30, at a homecoming pep rally and recognized at the homecoming football game on Saturday, Oct. 1.

O’Shea Owens is a senior from Hobart, Indiana, majoring in criminal justice and psychology. He is involved in residence life, Blue Crew and Student Ambassadors. He hopes to continue on to graduate school in either criminal justice or law.

Other students named to the homecoming court were:

Students with junior or senior academic standing were eligible to be nominated by other students, faculty or staff members. All nominees who met requirements were added to a ballot, which was sent in an online survey for voting. The top five male and top five female nominees following the popular vote made up the homecoming court and the top male and female were crowned king and queen.