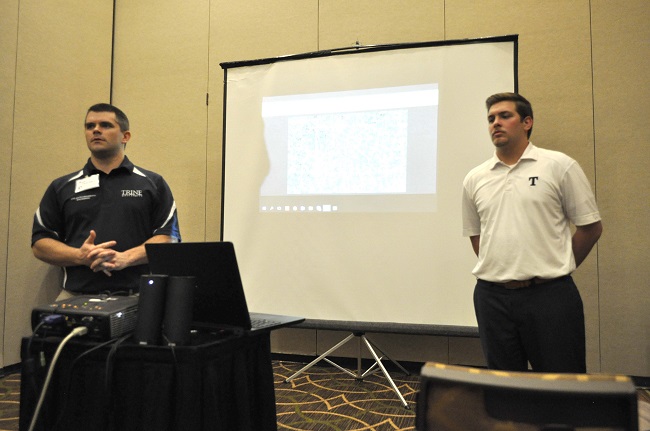 ANN ARBOR, Mich. — Heavy vehicle traffic may have more impact on the Angola Mound and other roundabouts than previously thought, according to research presented by a Trine University professor and student.

Ryan Overton, Ph.D., associate professor in the Reiners Department of Civil & Environmental Engineering, and Rick Perry, a junior civil engineering major and president of Trine’s ITE chapter, spoke on “Evaluation of Heavy Vehicles on Capacity Analysis for Roundabout Design” at the Institute of Transportation Engineers (ITE) Great Lakes District meeting. The meeting was held April 19-20 at the Sheraton Hotel in Ann Arbor, Michigan.

“Rick has shown interest in transportation engineering throughout his academic career and has worked on numerous transportation projects through his internships with Beam, Longest, and Neff in Indianapolis,” said Overton, who also serves as advisor for Trine’s ITE chapter. “Rick and I often discuss solutions for transportation issues we observe, which led me to offer him an undergraduate research position.”

Perry said it was the first time he had given a research presentation to an audience of professionals.

“The research we did was just a pilot study; however, it generated an enormous amount of discussion,” Perry said. “Following the program several professionals approached us to discuss the research. One gentleman even went as far as complimenting us, saying that, ‘Your presentation was one of the best I have seen at a transportation conference.’ ”

Overton and Perry would like to evaluate other roundabouts with moderate truck traffic in the future to determine if they can get similar results.