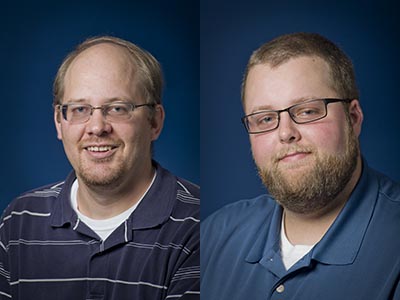 “With the tremendous growth Trine University is experiencing in its athletic programs, it made sense to enlarge our sports information staff,” said Matt Land, assistant vice president of athletics. “Nick and Jeff bring a wealth of experience in sports information at the collegiate level, and we look forward to the work they will do with our expanding athletic teams.”

“I’m excited to be at Trine and am thankful for the opportunity. There are a lot of good things happening on campus with new facilities and success of the athletic teams that make Trine a very appealing place to work,” said Hoedt. “I’m looking forward to experiencing the game day atmosphere as well as getting to work with all the coaches, players and the rest of the campus community.”

Duffy comes to Trine from Adrian College in Adrian, Michigan, where he had served as graduate assistant sports information director since 2015. He earned a Bachelor of Arts in philosophy and English writing and a Master of Arts in sport administration and leadership from Adrian.

“Trine is quickly becoming a premier Division III university. Its continuing growth and commitment to excellence, both in the classroom and on the field, makes it an honor to be a part of the staff,” he said. “I couldn’t be more excited for the opportunity to join this community.”