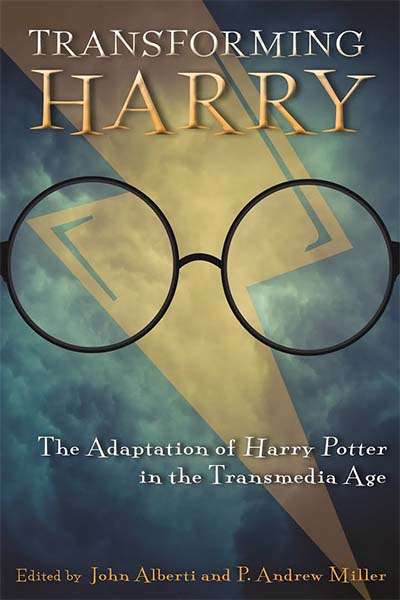 A chapter written by Cassandra Bausman, Ph.D., assistant professor in the Department of Humanities and Communication and director of the Writing Center, will be published in an upcoming book of academic essays discussing various adaptations of the Harry Potter books.

“Transforming Harry: The Adaptation of Harry Potter in the Transmedia Age” will be released May 7 by Wayne State University Press, and is available for preorder on Amazon.

Edited by John Alberti and P. Andrew Miller, the book is a collection of eight essays examining the phenomenon of the Harry Potter books and movies. The book’s description notes, “The movie version of the first Harry Potter book, Harry Potter and the Sorcerer’s Stone, premiered in 2001, in between publication of the fourth and fifth books of this global literary phenomenon. As a result, the production and reception of both novel and movie series became intertwined with one another, creating a fanbase who accessed the series, first through the books, first through the movies, and in various other combinations.”

Bausman’s chapter focuses on the ending of the film Harry Potter and the Deathly Hallows – Part 2. Departing from the narrative of the book, in the film Harry breaks the Elder Wand, the most powerful weapon of the movie’s magical world, to bits and hurls it into a gorge.

For Bausman, this is a more definitive conclusion to the series than what was portrayed in the book.

“Rather than merely setting the super weapon aside, or keeping it safe as a respected artifact removed from use as the novel describes, at the film’s close, Harry's actions serve as definitive argument: No good can come of the exercise of an evil means, but evil can be averted if its use is disallowed; power must be destroyed, not gained for oneself,” she said.

Bausman contends the film’s ending not only reflects the rejection of power, but offers a coming of age model for 21st century young adults.

“The Deathly Hallows, Part 2 leaves its audience with a moving portrait of a matured, iconic trio and the dawning, awesome recognition that the world is huge, fraught, enigmatic, magical, dangerous, delightful and, ultimately, the responsibility of young people who must first find their own footing,” she said.

Bausman became involved with the project while working toward her Ph.D. in English literature at the University of Iowa. Her areas of expertise include fantasy literature and film.

An audiobook version also is planned, which Bausman said is unusual for academic works.

“This is an indication of the level of confidence the publishers have in this book’s ability to reach a wide readership, and to appeal both to scholars and academics and to more popular audiences looking to engage more deeply with the Potterverse,” she said.