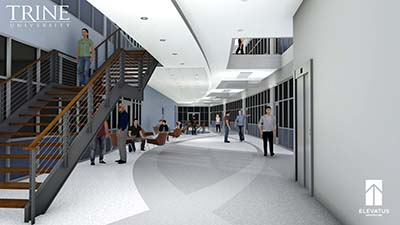 To help meet the growing need for professionals in areas such as hardware and software development, networking and information technology, Trine University will launch its new School of Computing in the fall of 2019.

The new academic school eventually will be housed in a planned $8.5 million expansion to Fawick Hall on Trine University’s main campus in Angola.

The School of Computing will encompass current Trine programs in computer and software engineering as well as a revitalized computer science and information technology major that will feature new tracks in the increasingly important fields of cybersecurity, health informatics and web development.

“Trine University’s new School of Computing will allow computer science students to collaborate more closely with students and faculty in engineering, providing greater synergy for the educational experience in all majors and giving computing students access to the latest technology,” said John Shannon, Ph.D., vice president for academic affairs. “We developed these programs with input from a world-class advisory board who helped us infuse the curriculum with the technological expertise required of our industry partners.  We strongly believe this future-thinking curriculum and our planned leading-edge facilities in the expanded Fawick Hall will ensure we produce highly skilled computer science professionals who will continue to be in demand by industry.”

Fundraising has begun for the Fawick Hall expansion, which was approved by the university’s Board of Trustees at its Oct. 5 meeting. No timeline has been set for construction.

Current designs for the expansion include an airy, glass-walled exterior that will make a striking addition to the heart of the Trine University campus. The expansion also will feature:

“Through the outstanding generosity of our alumni, friends, and local and state government, Trine University has been able to add several new signature facilities to our campus as well as provide functional, visually appealing additions and renovations to existing buildings,” said Earl D. Brooks II, Ph.D., Trine University president. “This new expansion, which will provide critical space and technological support for the School of Computing, will reflect the same quality and aesthetics demonstrated in other recent projects on the Trine campus.”

This is the second major academic program expansion announced by Trine within the last month. In October, the university announced an expansion of its health sciences programs, including planned degrees in applied health sciences, surgical technology, occupational therapy, anesthesia, nursing, radiologic technology and speech language pathology.