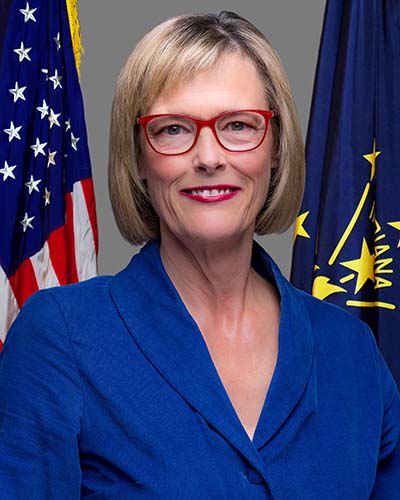 Suzanne Crouch, lieutenant governor of the State of Indiana, will give the Commencement address for Trine University’s 134th Commencement on Saturday, May 4.

The scheduled speaker, Barbara Pierce Bush, Humanitarian and Co-founder and Board Chair of Global Health Corps (GHC), was forced to cancel her planned Commencement address Thursday evening due to a family health emergency.

“I was so looking forward to spending time with you and your students and their families to celebrate,” Bush said in an email to the university. “I’m so disappointed I won’t be with you. Above all else, I hope you, your students and faculty have a joyous, wonderful weekend!”

Proud to have been born and raised in Evansville, Indiana, Crouch previously served as Indiana’s State Auditor from January 2014 through December 2016.

Before becoming auditor, she served as the state representative for House District 78, which encompasses parts of Vanderburgh and Warrick Counties. She was elected to the seat in 2005, and served as the vice chair of the Ways and Means Committee and on the Public Health Committee. She was honored to receive the 2012 Public Policy Award from the Arc of Indiana for her work with people with disabilities and was named Legislator of the Year in 2011 by the Indiana Association of Rehabilitation Facilities.

Prior to serving in the House of Representatives, Crouch spent eight years as auditor of Vanderburgh County. During that time, her office received its first clean bill of health in decades from the State Board of Accounts. She then went on to serve as a Vanderburgh County Commissioner until joining the House. She presided as president of that body during her third year in office.

She graduated from Mater Dei High School in Evansville. She then went on to receive her bachelor’s degree from Purdue University, majoring in Political Science, and four years later met her husband Larry Downs. Together they have a grown daughter, Courtney.