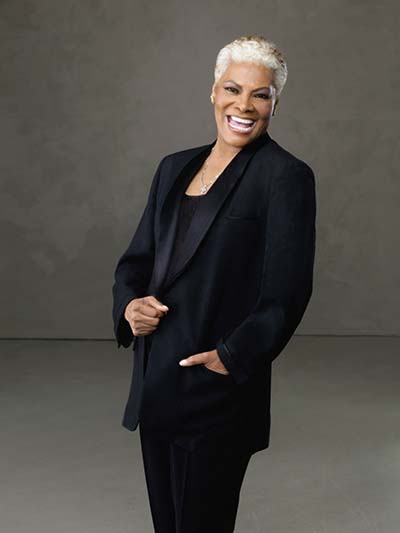 Trine University will welcome legendary pop, gospel and R&B artist Dionne Warwick to the T. Furth Center for Performing Arts for an Oct. 5 concert that will be part of annual Homecoming festivities.

Doors to the Ryan Concert Hall will open at 7 p.m., with the concert starting at 8.

Tickets will go on sale at trine.edu/furth beginning at 10 a.m. April 26. Regular ticket prices range from $50-$85, with VIP packages available for a limited number of fans.

Ticket price is included with each VIP package. A portion of the proceeds from VIP packages will be donated to Dionne Warwick Institute of Economics & Entrepreneurship, a public, magnet school located in Warwick’s hometown of East Orange, New Jersey.

Dionne Warwick is a six-time Grammy Award-winning music legend who has earned more than 75 charted hit songs and sold more than 100 million records. She began singing during her childhood years, initially in church.  Occasionally, she sang as a soloist and fill-in voice for the renowned Drinkard Singers, a group comprised of her mother Lee, along with her aunts, including Aunt Cissy, Whitney Houston’s mom, and her uncles. During her teens, Warwick and her sister Dee Dee started their own gospel group, The Gospelaires.

Warwick attended The Hartt College of Music in Hartford, Connecticut, and during that time, began making trips to New York to do regular session work. She sang behind many of the biggest recording stars of the 1960s, including Dinah Washington, Sam Taylor, Brook Benton, Chuck Jackson and Solomon Burke.

She was discovered by Burt Bacharach and Hal David in 1961 and went on to record 18 consecutive Top 100 singles  — “Don’t Make Me Over,” Walk on By,” “Say a Little Prayer,” “A House is Not a Home,” “Alfie,” “Heartbreaker,” “Déjà Vu,” among countless others. She received her first Grammy in 1968 for “Do You Know the Way to San Jose?” Warwick became the first African-American solo female artist of her generation to win the prestigious award for Best Contemporary Female Vocalist Performance. This award was only presented to one other legend, Ella Fitzgerald.

Warwick’s performance at the Olympia Theater in Paris, during a 1963 concert starring the legendary Marlene Dietrich, skyrocketed her to international stardom. In 1968, she became the first solo African-American artist among her peers to sing before the Queen of England at a Royal Command Performance. Since then, Warwick has performed before numerous kings, queens, presidents and heads of state.

In 1985, she participated in the recording of “That’s What Friends Are For,” which became a number-one hit worldwide and raised awareness and major funds for AIDS research, which she continues to support. She also champions causes such as The Starlight Foundation, children’s hospitals, world hunger, disaster relief and music education, for which she has been honored and has raised millions of dollars. Warwick also participated in the all-star charity single, “We Are the World” and performed at “Live Aid.”

Warwick has been honored by AMFAR, the Desert Aids Project, and Clive Davis at his pre-Grammy party. In September 2008, she added “author” to her list of credits with two best-selling children’s books, “Say A Little Prayer,” and “Little Man,” and her first best-selling autobiography, “My Life As I See It” for Simon & Schuster.

Warwick was inducted into The Grammy Museum where a special 50th Anniversary career exhibit was unveiled. Most recently, Warwick released a star-studded duets album entitled, “Feels So Good,” featuring collaborations with some of today’s greatest artists, and received the coveted and prestigious 2017 Marian Anderson Award for her career accomplishments and philanthropy. She was honored in a 2018 PBS Television Special, “Then Came You,” was named 2019 Ambassador to the Smithsonian Institute’s Year in Music, and is a 2019 Grammy Lifetime Achievement Award recipient.