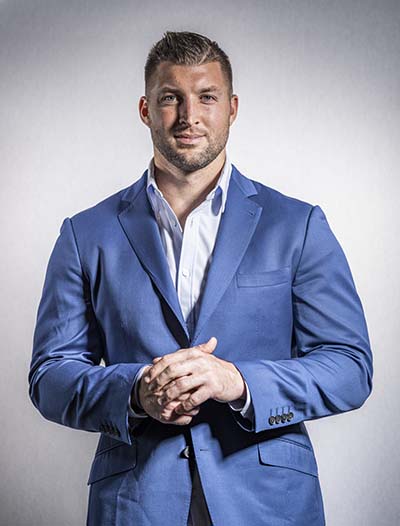 Tim Tebow, former Heisman Trophy winner and current ESPN broadcaster and noted philanthropist, will deliver the address at Trine University’s Commencement on May 7.

The ceremony begins at 10 a.m. in the Keith E. Busse/Steel Dynamics Inc. Athletic and Recreation Center on Trine’s Angola, Ind. campus. The Trine Broadcasting Network will offer a live stream of the event at livestream.com/trinebroadcastingnetwork.

“Tim Tebow is not only one of the greatest athletes of his generation, he is also an inspirational leader to millions,” said Earl D. Brooks II, Ph.D., Trine University president. “Since launching the Tim Tebow Foundation in 2010, his work has touched countless lives, both in this country and in the Philippines. We look forward to having him share his unique personal story and the passion that drives him to serve others.”

Tebow played college football at the University of Florida, where he became the first sophomore to win the Heisman Trophy and led his team to two NCAA BCS National Championship victories in the 2006 and 2008 seasons.  At the conclusion of his collegiate career, he held the Southeastern Conference's records for career passing efficiency and rushing touchdowns. He followed his collegiate success by playing three seasons in the National Football League for the Denver Broncos and the New York Jets. Tebow also played several seasons of professional baseball in the New York Mets system and returned briefly to pro football in 2021 as a member of the Jacksonville Jaguars. Today, in addition to his foundation work, Tebow is an ESPN college football analyst, appearing mainly on the SEC Network as co-host of SEC Nation, a travelling pre-game show. He also contributes frequently to ESPN's other platforms, including serving as a regular guest analyst on First Take, the ESPN program hosted daily by Stephen A. Smith.

As a philanthropist, Tebow envisioned a foundation to give back to others during his college career, and he, along with other University of Florida students, created "First and 15", raising funds for Uncle Dick's Orphanage in the Philippines, founded by his father's nonprofit association, the Bob Tebow Evangelistic Association. The Tebow Foundation also partnered to build a children's hospital in the fall of 2011 in the Philippines, the country where Tebow was born. The Tebow CURE Hospital in Davao City, on the island of Mindanao, holds 30 beds and specializes in orthopedics.

Tebow is also known for his outspoken Christian faith. In the Philippines, he preached at schools and villages, and assisted with medical care. Tebow supports more than 40 national evangelists working in that nation. In the United States, Tebow has shared his Christian faith in prisons and schools, to church and youth groups, and at meetings and conferences.

“We are truly honored to have someone of Mr. Tebow’s background and character celebrate the 2022 Trine University commencement with us,” continued Dr. Brooks. “I know his participation will make the day even more special for Trine students and their families.”