Going behind the sounds at WEAX

Working at a radio station at the college level is not an opportunity many undergraduate students receive – unless they attend Trine University.

Being a WEAX employee means partaking in many tasks. Sheteron and Wilde’s work relates to music and sports, while Thiess hosts his own segment, American Archives. The students had little to no experience with broadcasting and its many components before this year, but they are quickly becoming very comfortable and competent within this setting.

Sheteron and Wilde began working at WEAX last semester, while this is Thiess’ first semester.

Both Sheteron and Wilde serve as DJs. It is their responsibility to introduce songs, as well as suggest songs for the station’s playlist.

“We’re given a lot of freedom when introducing songs,” explains Wilde. “We have a template to use, but we make the content our own. Our goal is to keep the content interesting for both ourselves and our listeners.”

Sheteron and Wilde are tasked with employing various plugs while they are on the air, whether that is promoting an upcoming sporting event or encouraging listeners to follow WEAX on Twitter. 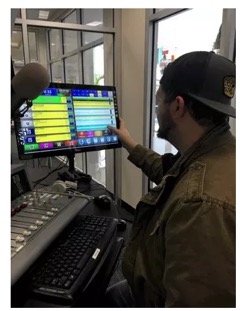 In addition to serving as a DJ, one of Sheteron’s primary obligations at WEAX is recording content to play between the halves of football and basketball games. He often borrows content from Trine’s official website.

“I most recently recorded a segment about the installation of the women’s triathlon team,” explains Sheteron.

When Trine University’s Sports Director, Aaron Coyle, calls play-by-play during sporting events, Sheteron and Wilde assist in the production. This means spending long hours in the studio taking Coyle on and off the air, playing advertisements, and queuing up halftime shows.

Elijah Thiess hosts his own two-minute segment, American Archives, every weekday at noon. In addition to researching the day’s topic, he writes and records content completely of his creation.

“I talk about obscure events in American history that had a large impact on the country or that are just really interesting,” explains Thiess.

For example, on February 7, Thiess developed a piece about the Beatles’ arrival in the United States:

In the early hours of the morning on February 7th 1964 four young men boarded Pan Am flight 101 at Heathrow Airport in London. They were surrounded by thousands of people who had arrived from all over Britain. Screaming, sobbing girls held up banners and the police linked arms in long chains to hold them back. Meanwhile, back in the United States the news began to spread like wildfire… the Beetles were coming.

John, Paul, George, and Ringo were told by the pilot that they had a “big crowd waiting for them” in New York. That was a bit of an understatement. Over five thousand fans and reporters had crammed into JFK Airport in New York.

Beatlemania had officially begun in America. During their first trip across the pond they performed on The Ed Sullivan Show twice, attracting over 70 million viewers each time. They also performed live at Washington Coliseum in Washington D.C. and Carnegie Hall in New York.

At the height of Beatlemania, just before the Beatles arrived in New York, a reporter from The Washington Post called Irv Robbins, co-owner of Baskin-Robins Ice cream, and asked what new flavor would be coming out to honor the Beatles. The truth was, Baskin-Robbins had not invented a Beatles flavor. Caught unprepared, Mr. Robbins replied, “Uh, Beatle Nut, of course.” The new flavor was created, manufactured and delivered in just five days. — Elijah Thiess, American Archives, February 7, 2017

All three students appreciate the opportunity to gain on-air experience as well as work in the public eye. The three thoroughly enjoy each other’s company in addition to the “laid-back” setting of WEAX.

“The thing I like about all of the students that work at WEAX is that they take ownership in the station. They’re not just punching a clock,” Hornbacher states. “Obviously, the experience that they gain writing, producing, and announcing is invaluable, but being a part of a college radio station is something that you never forget regardless of where you end up professionally.&rdquo