It can be difficult being a freshman in college, and at times scary joining a group as tight-knit as students in Humanities and Communication. So, when a student stands out, you definitely want to acknowledge them.

Freshman Jessica Griffioen beat out a tough crowd to win the Outstanding Freshman in HAC Award the year. Still, it wasn’t too much of a surprise for those who have had her in class. HAC professor Dr. Jeanette Goddard said, “Jessica’s writing is overwhelming good. She’s generous in helping other students with their writing.” 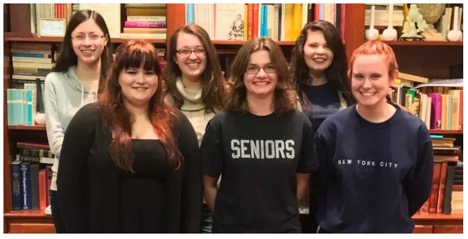 Jessica Griffioen (back row, left) as part of the HAC Media Team.

HAC professor Dr. Don Jones agreed about her strong writing. “Jess wrote what is by far the best paper ever written in the history of the course [COM 152: Principles of Public Relations], doing thorough, high quality research and analysis.” Griffioen showed off those writing skills as part of the HAC Media Team this semester writing for this very website.

Not to be outdone, transfer student Jordan Blank was the strong pick for Outstanding New Student in HAC, which encompasses both transfers and those students who have changed majors after their first year. HAC professor and Jannen School of Arts and Sciences Dean Amy Nicholls was taken by Blank’s work in her The Bible as Literature class. “She validated other students’ opinions while still expressing her own opinion with grace and tact,” Nicholls said. “She was an excellent leader in small group activities and often was the spokesperson for her group, as well.”

HAC professor and Writing Center Director Dr. Cassandra Bausman has seen a different side of Blank working in the Writing Center. “She’s also an exceptional Writing Center tutor and will be an amazing teacher if she goes that route.” She additionally pointed out that Blank had organized an eight-hour plus Star Wars tabletop RPG campaign for this year’s Playing for Pets.

Both young women, as well as the rest of the freshmen class, have obviously been invaluable additions to the department.