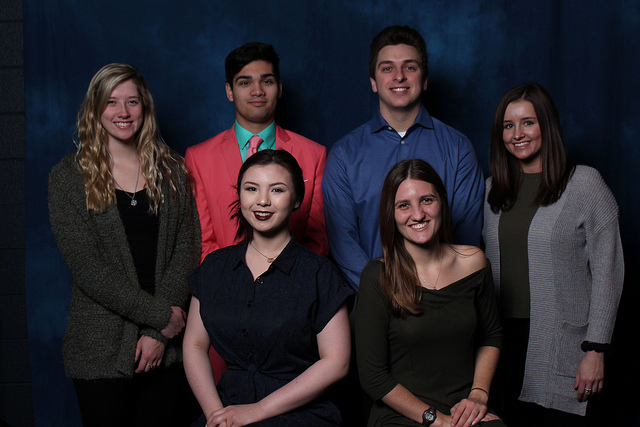 Jarod is attending school to receive a Bachelor of Arts with a major in Communications. The junior from Angola, Indiana, has career aspirations to work in public relations and create digital content to positively impact the world. As well as being a member of the HAC Media Team, he is heavily involved with Greek Life as the Vice President of Acacia Fraternity and Vice President of the Drama Club on campus. Outside of school and Greek life, Jarod holds a position as an I.T. Help Desk representative at Trine. In his free time, he enjoys participating in philanthropy and videogames. One day he hopes to live and work in a city atmosphere.

Shay is a sophomore Communications major and minor in Marketing from Pinckney, Michigan. She can be seen on the basketball court as a member of the Women’s Basketball team or podcasting for 88.3 WEAX Radio. In her fall semester, she worked as an intern for the radio station on campus gaining valuable experience in live streaming and creating broadcasts. Her involvement in athletics isn’t just on the court, look to the sidelines where Shay holds a position with the Sports Information department and helps run the social media account of Trine Athletics. Shay is also a student representative for Student Athletic Advisory Committee (SAAC). Paddle boarding, listening to music, and watching Better Call Saul series is her favorite pastimes. After graduation, Shay hopes to join the Peace Corps and purse a career in Public Relations living out West.

Kaitlyn has a background in theatre and acting both on stage and on the rink. Her previous experiences lead her to the decision to purse a Bachelor of Arts degree majoring in Communications, with Forensic Science minor. The freshman from San Diego, California divides her time up between skating for Trine’s Synchronized Skating team, school, and other organizations such as Theatre and Drama Club, S.P.E.A.K., and Rotaract. Ultimately, she aspires to work for a nonprofit organization and develop informational PSA ad campaigns.

Ryan would like to work in marketing or social media position for a professional sports organization after college. When not attending classes, Ryan actively participates in sporting events and attends campus events with his friends. The junior from Saginaw, Michigan is a Marketing major and Communications minor. On campus, he takes part in professional organizations like Ehinger Fellows for Ketner School of Business, American Marketing Association, and National Society of Leadership and Success. His love for sports has contributed to his desire to work for a professional sports organization, while exploring different locations to live.

Anna lives in Angola, Indiana pursing a degree in Communications and minor in Marketing, graduating year of 2020. Her fondness of writing guided her interest to being a member of the HAC Media Team. Anna has been an intern for an array of places such as Public Relations intern for the University’s Marketing and Communications department, United Way organization in town, and Admissions Office on campus. When the weather is warm you can find her lakeside or on the water. The dream job for Anna is centered on the discipline of marketing and public relations in a city-like atmosphere.

Lacie is a senior from Spring Lake, Michigan receiving a Bachelor of Business Administration in the spring of 2019, majoring in Marketing with a minor in Communications. She is a captain of the Women’s Cross Country team, member of the Women’s Track and Field team, student representative for Student Athletic Advisory Committee (SAAC), a campus tour guide, and Vice President of Programs for Trine’s American Marketing Association chapter. She has held positions as a Downtown Services intern for the City of Angola and currently holds a Digital Marketing role for Trine’s Marketing and Communications department on campus. Outside of school, Lacie enjoys photography, baking, interacting with her peers, listening to music, and staying active. Her career aspirations are to be actively involved in her community and to hold a position in the field of digital marketing, community engagement, or social media.