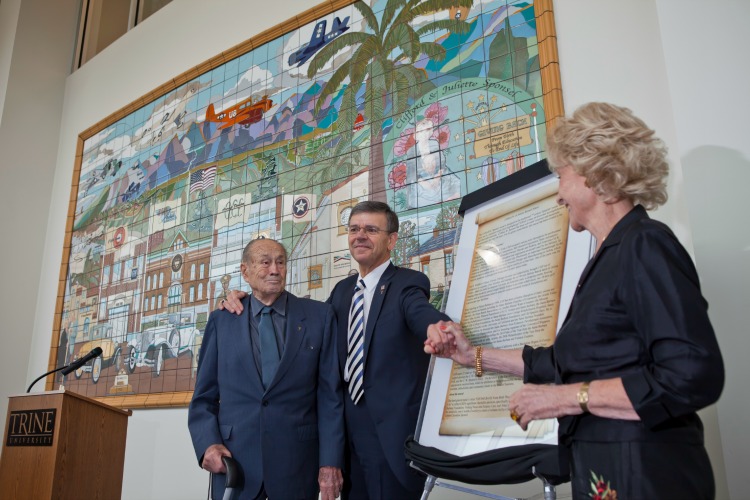 The Trine University community is mourning the loss of an ardent supporter and alumnus who is credited with inventing the first in-car thermostat.

Clifford W. Sponsel, 104, died Monday in Santa Barbara, Calif. He graduated from Tri-State College, now Trine, in 1931 with a Bachelor of Science in civil engineering, had served as a university trustee and was a longtime faithful friend and supporter of Trine.

“We are saddened by the loss of Cliff and are grateful for the friendship and support provided by Cliff and his wife, Juliette,” said Earl D. Brooks II, Ph.D., Trine president. “Cliff’s dedication and generosity to Trine is evident on our campus and will benefit future generations, too.”

Trine’s C.W. Sponsel Administration Building, for which Sponsel donated $1 million, is named in his honor. Also bearing his name are Sponsel Towers in Fawick Hall and Sponsel Library in the Rick L. and Vicki L. James University Center. In October 2012, Trine dedicated the mural “Giving Back: From Birth through Education to the End of Life,” which reflects Sponsel’s life. The mural was designed by his wife. He was also responsible for the renovation of bookstore space in the former Ford Library.

“I am grateful for my success, and for this reason I have tried to help others,” Sponsel said in October 2007, during the dedication of Sponsel Administration Building. His motto was “It’s important to give something back.”

In July, Sponsel celebrated his 104th birthday and was Trine’s second oldest living alumnus. He served on the Board of Trustees from 1978 to 1999 and received the Distinguished Service Award in 1977; the Pillar of Success award, Trine’s highest honor, in 2007; and was awarded an honorary Doctor of Engineering in 1985.

When he turned 100 in 2010, the university observed Dr. Clifford W. Sponsel Day on campus.

His career began with General Motors and he is credited with inventing the first in-car thermostat.