Coach Shea Chambers and her team traveled to the Cheer Ltd. Nationals at CANAM near Myrtle Beach, N.C., to compete on March 20. For the past three years, High Voltage competed only in the jazz contest at nationals. This year, they entered both jazz and hip hop routines and won the competitions.

“I knew when choreographing their routines that numbers would be a challenge. I decided speed, lots 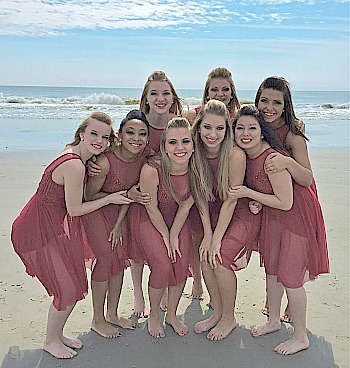 of transitions and a variety of skills would be the best route,” Chambers said. High Voltage was the smallest team in both of the categories they competed in at CANAM, with most other teams having at least 15 dancers.

“I would say the speed of our music, variety and transitions were all in our favor,” Chambers said. “My small but mighty team looked great.”

After learning hip hop in October, they moved onto jazz the following month. By the time the team returned from Thanksgiving break, they were devoting practice time to both of their competition dances in addition to their Trine game day routines.

For Chambers, the most memorable aspect of competition weekend was a shared moment with team captain and senior accounting major Toni Todd, who Chambers said reminds her of herself in college.

“She is fun, but work comes first. She is not scared to call someone out and push them to the next level because at the end of the day it’s all in love and to make the team better. She leads the team from beginning to end,” Chambers said of Todd. “When they called our names for first place we lost it at the same time. I don’t think I could ever forget that moment.”

Todd, of Muncie, credits the team’s success at nationals to Chambers’s support and dedication.

“Nationals was amazing for me this year, especially being a senior, because I think it shows all the hard work and dedication we have put in over the last several years to get there,” Todd said. “It has been awesome to see the program grow from a brand new team to national champions in just four years. I couldn’t be more proud of my team and I can’t wait to see what coach Shea does in the future.”

“Winning at nationals was the best way for me to end my senior year, and I believe that success was because of Shea,” Semock said. “I’m excited to see the dance program continue to grow under her direction and can’t wait to come back to a football game and be able to watch from the stands.”

Looking toward the future, Chambers is hoping to grow High Voltage. “Currently we have 10 members and only eight of those compete. I would love to have a team of 15 or more and of course win nationals again,” she said. “I think these championships are just the beginning to a long and successful dance program at Trine.”

Other members of the winning team are: