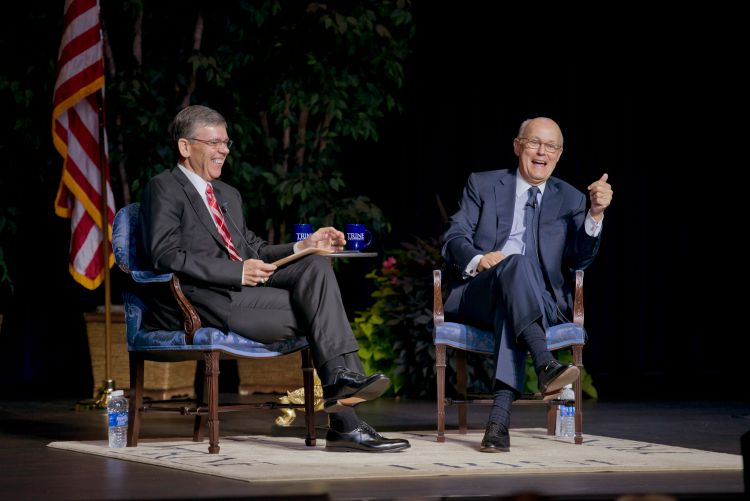 Here a few highlights from the discussion:

On the state of national security since the terror attacks Sept. 11, 2001."It's a lot better but so are they," Wilhelm said of terror groups. "They watch us, they're smart, they see what's going on."

The U.S. will never be perfectly secure, but people are more conscientious. ... The Department of Homeland Security was organized and is a typical government response; the 22 agencies within Homeland Security do not always work as smoothly as most would wish. ... The intelligence community is far better and has gotten inside many of these terrorist organizations. ... Terror groups have metastasized with big variety and huge unknowns ... they hide in plain sight.

On the qualities of effective leaders
Leaders should have a desire to be there, be disciplined, have a sense of curiosity and be reasonably warm and personable with an ability to connect with people at all levels.

On Edward Snowden, leaker of U.S. surveillance
Snowden was employed by Booz Allen, the same company Wilhelm serves. "The excessive secrecy ... worked against us and created an opportunity for Snowden," he said. Americans like what they get from surveillance but they might not like what they hear about what goes on behind the scenes, he said.

During his discussion of national security, Wilhelm said engineers interested in the intelligence community "won't find any more challenging or interesting work" than intelligence. "World-class mathematicians make a lot of money ... the key to breaking codes is math; encryption analysis and breaking codes are make problems."

Before Wilhelm spoke, Trine's Air Force ROTC presented the U.S. flag and the University Choir performed "God Bless America" under the direction of Mark Kays. Then, a moment of silence was observed for the anniversary of the Sept. 11, 2001 terror attacks.