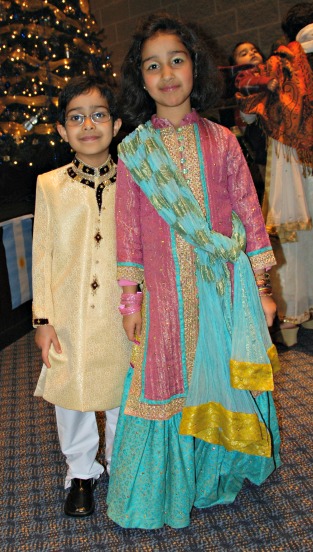 A highlight of this year's program was the first international fashion show that featured approximately three dozen students and community members in clothing representative of their native countries. A panel of judges awarded prizes to the top two participants in the categories of children, women and men. The show closed the program that included students who have studied abroad, a local celebrity, a singer from a neighboring college, a trio of singers/musicians from Trine and young dancers.

The program, billed as one of the group's most dynamic programs ever, was designed to provide a unique and entertaining learning experience appropriate for all ages.

In opening the program, Haseeb Kazi, Ph.D., director of the Study Abroad program, asked everyone to observe a moment of silence for "the people of Paris and around the globe who have suffered and given their lives for good causes." Paris was hit with a wave of ISIS terror attacks on Friday, Nov. 13.

"This program is all about diversity; how you value diversity in education and culture and what does it teach us; the gifts of diversity with a focus on Study Abroad," Kazi said.

An inspirational message from Stuart Jones, Ph.D., vice president for enrollment management, stressed the importance and value of diversity.

"I wish you could see what I see -- look around," Jones told the audience, encouraging everyone to stand and meet someone new. Trine is fortunate to have nearly 400 students representing 20 countries, he said, because it increases diversity and opportunities to learn from each other.

"Let’s educate one another and celebrate diversity. Let’s heal the world and make it a better place," Jones said. Moments earlier, Jones told the audience he is a fan of the late Michael Jackson and especially appreciates the hit song "Heal the World," which many consider an anthem for world peace.

His message was not lost on the audience or other presenters. Golnaz "Goldie" Matthews, host of the "The Goldie Show" on WFFT channel 55, referenced Jones's remarks when she spoke about her experiences as a person of Iranian descent. Diversity is a key reason America is successful, she said.

"I worked in different industries, learning about places and the culture," she said, adding her life has "come together as one of many challenges.” When the U.S. was rocked by terror attacks Sept. 11, 2001, she was working as a general manager at a fast food restaurant when a patron hurled a cup of coffee in her face. "That did not stop me," she said, nor did it change her view on America and Americans. 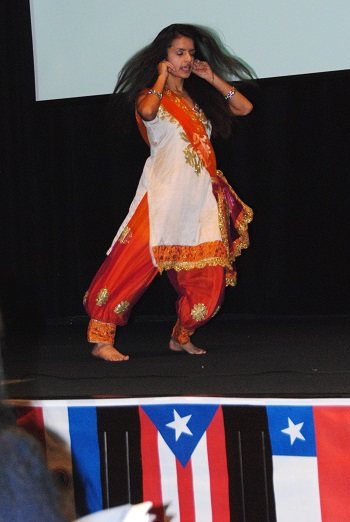 After that incident, she was invited to speak at a nearby school. The first question a sixth-grader posed to Matthews was “Do you hate Americans?” She quickly told the student “No, it was just one person.”

“Hatred is not everything. Move on and love one another; understand culture and move on,” she said. “Learning and moving on is very important.”

She closed by asking everyone to keep their roots intact while learning about other cultures, to never give up because dedication and persuasion are important, and to respect each other because respect is most important.

Another guest to the stage in Fabiani Theatre was Paresh Mishra, Ph.D., an assistant professor at IPFW who shared his singing talent. The Buehrer sisters, Elyse, August and Iris who are Trine students, also sang and performed "Heal the World" after being inspired by Jones.

Door prizes were given throughout the evening.