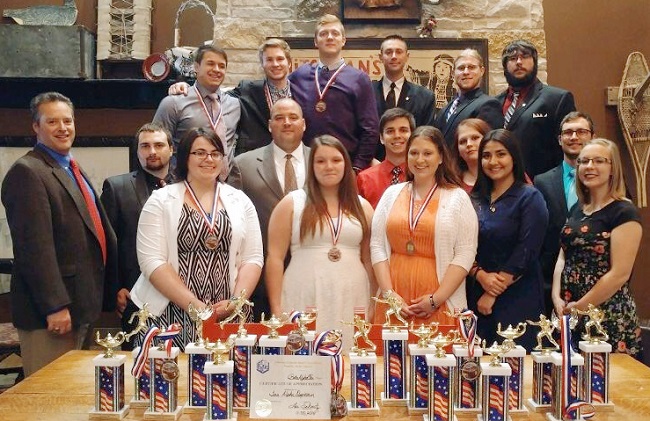 “Our current and former students represented Trine in an outstanding manner and won many team and individual awards. I could not be any prouder of them,” said Craig Laker, Dean of the College of Graduate and Professional Studies.

Laker and Cisco Ortiz, instructor in the Department of Criminal Justice, Psychology and Social Sciences, accompanied the students as ACJA-TAO Chapter Advisors. Ortiz, Laker and Andrew O’Connor, a fall 2015 graduate, competed in the professional division while the students participated in the lower and upper divisions based on their year of education.

“Most of the attendees were first-time attendees of the ACJA Regional Conference.  They gained a great experience and were able to network with other students from across the Midwest.  Our students did very well in taking on this challenge and learned a lot in regards to what to expect for future conferences”, said Ortiz. “We look forward to competing at the national level in Austin, Texas, next March.”

The regional chapters that attended the conference agreed that Trine University’s chapter will host the event in fall 2017. The conference will bring multiple chapters from the seven-state area (Indiana, Ohio, Minnesota, Wisconsin, Illinois, Michigan and Iowa) to northeast Indiana to attend the conference and compete in events.

Trine’s team won eight Academic Awards for testing in the areas of Criminal Law, Corrections, Juvenile Justice, Police Management and the History of ACJA-Lambda Alpha Epsilon and 10 awards in the three other competitions. A total of 80 awards were at stake. Trine University won the following awards:

Seth Gifford, a freshman biomedical engineering student from Bloomington, Illinois, placed first in the 25 years of age and under division.