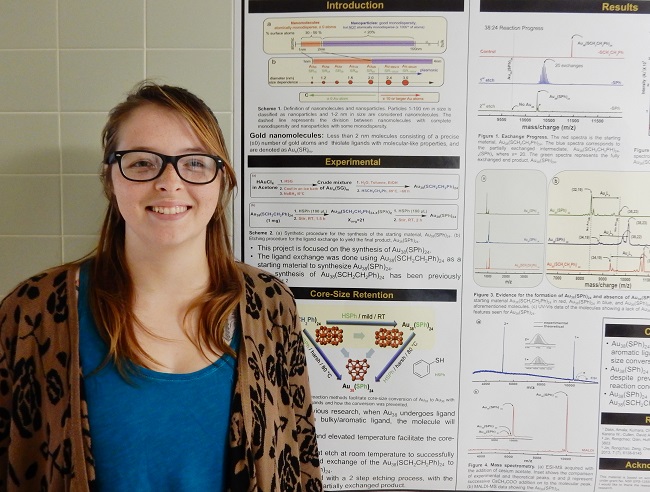 Burrage, a chemistry major from Auburn, participated in a Research Experience for Undergraduates (REU) for 10 weeks at the University of Mississippi. While there, she worked on a project synthesizing Au38(SPh)24 nanomolecules.

“Au38(SPh)24 is a type of gold nanomolecule, meaning it is less than 2 nanometers (one-billionth of a meter) in size,” Burrage said. “The nanomolecules can be used for many things, including cancer research.”

Burrage said she applied for the REU after finding out about the opportunity through an email she received from Vicki Moravec, Ph.D., professor of chemistry.

“I wanted to get some insight on how research worked and make some good contacts in the professional world of chemistry,” she said.

She said she received a personal phone call from Amala Dass, Ph.D., associate professor of chemistry and biochemistry at the University of Mississippi, asking her to be one of the 15 undergraduate students to take part in the project.

“He told me he thought I would be a good match for his lab,” Burrage said. “I was extremely honored to have this opportunity.”

She started each day in the lab at 8 a.m. and worked on her project until 10 a.m., when she would attend a lecture, “usually on some new and different type of research or chemistry I had never been exposed to,” she said. Then she would return to the lab and work until 5 to 7 p.m., with the exception of a lunch break.

“I even had to go in at night once due to the nature of our experiment,” she said.

She said her classes at Trine gave her the knowledge she needed to conduct the research she was assigned.

“I had already taken instrumental analysis, organic chemistry and inorganic chemistry, which prepared me with the knowledge to use the instruments in the lab, have a basic understanding of why this work was important and how it all worked,” she said.

“The experiment itself involved chemical reactions that took anywhere from hours to days to complete,” she said. “I was able to complete my project in 10 weeks and start a paper because the graduate student I worked with had already started trying to iron out the kinks in the mechanism.”

At the end of the REU, Burrage, along with the other students involved, had to give a 15-minute presentation on her project.

“It was both frightening and exhilarating,” she said. “I presented not only in front of my boss, but in front of students and faculty from the whole department. There were probably close to 45 people in the room, and this was my first time talking in front of people like that about my own work. It went really well, though, and I put in a lot of effort to make it a good presentation.”

“The great part about the research is that this is the first reported case of making this nanomolecule and keeping its ‘identity’ intact,” she said. “The 38 indicates that there are 38 gold atoms in the molecules and in the past when this type of nanomolecule was attempted, it would change and have only 36 gold atoms. Our research opened the door for new types of nanomolecules to be made and new methods of making them.”

Burrage said the research eventually will be published in a scholarly journal, most likely the Journal of the American Chemical Society or the Journal of Physical Chemistry. She said she is still undecided about whether to go into research or teaching for a career.

“This experience opened my eyes to the reality of graduate school. It is a lot of long hours and hard work to possibly have nothing go right,” she said. “We had to be prepared for anything to go wrong at any minute. I kept on my toes but I also realized the type of pressure there is to succeed.”