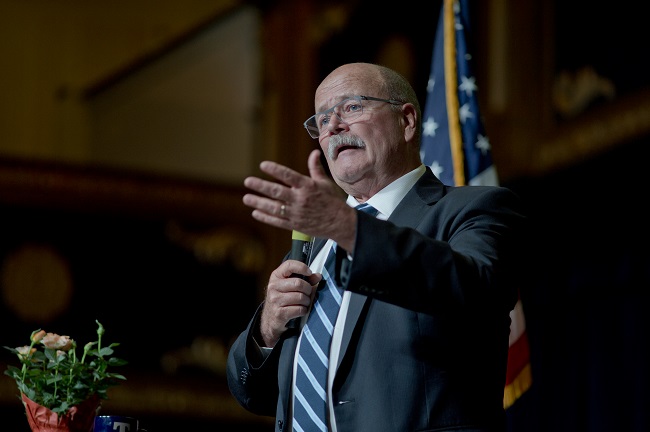 It was not the first time Gregg had been inside the building — he said he had attended the funeral of state Rep. Orville Moody, R-Angola, in 1989 when the Angola Christian Church was housed there.

Gregg, who served as a member and later Speaker of the Indiana House of Representatives and also was the Democratic Party nominee for governor in 2012, encouraged Trine students in attendance to be involved and engaged in the election process.

“Elections do matter, and so do the policies and priorities of those we elect.”

While touching on various issues related to the campaign, Gregg gave most of his attention on the state’s economy.

“My running mate Christina Hale and I both believe that it’s time to refocus state government on the big mission, and that big mission’s the economy,” he said. “If we talk on the economy everything else is going to fall in line.”

Following his address, Gregg took questions from the audience. Trine President Earl D. Brooks II, Ph.D., closed the event by asking the candidate if, as governor, he would continue Indiana’s Regional Cities Initiative, established last year to financially support projects that will increase regional economic and population growth. Trine University received $2.8 million in Regional Cities funding in August toward the construction of the Thunder Ice Arena and MTI Center.

Gregg responded that if elected, he would continue the program.

“When something’s been done right, we need to keep it going and improve on it, and I think the Regional Cities program has worked well,” he said.