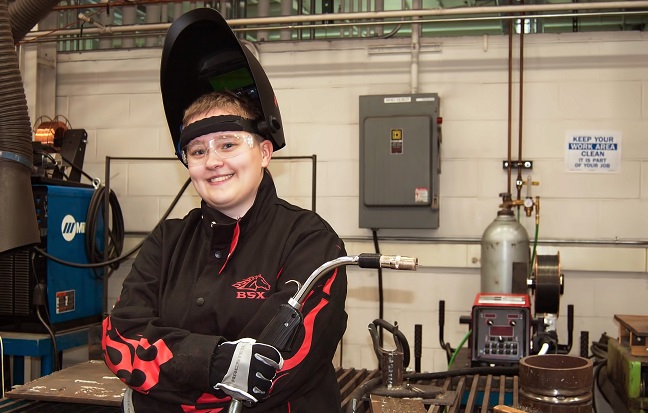 GOLDEN, Colo. — When Christie Hasbrouck BSME 2016 came to Trine University, she was fascinated by airplanes. While at Trine, she discovered a passion for metallurgy and materials engineering.

Now, as a graduate research assistant, she gets to combine both.

Hasbrouck began her graduate studies in metallurgical and materials engineering at the Colorado School of Mines in Golden, Colorado, on July 1. The research project she assists with involves laser brazing of high-temperature materials, particularly silicon carbide (SiC), a ceramic material.

“(SiC) is gaining popularity in the aerospace industry because of its incredibly high working temperature range, low density and excellent oxidation resistance,” she said.

Her love of airplanes — particularly military stealth aircraft, she said — began when her father took her to the 2007 Air Fair in Terre Haute, Indiana, her hometown.

“When I was asked what superpower I would want as a kid, I would always say the ability to fly,” she said. “I guess something about flying has always fascinated me — the freedom to go anywhere at any time, and see things from above.

“Before the Air Fair, I had never seen smaller airplanes, or military airplanes. One of the coolest things about this particular Air Fair was that the commentators were actually talking with the pilots as they were flying. The feelings those pilots described were exactly as I imagined flying would be.”

“Dr. VK Sharma (professor of mechanical and aerospace engineering) and I had many conversations about materials and metallurgy outside of class,” she said. “He and I compared the differences between a traditional metallurgy program and the newer materials program at graduate schools. The more I learned, the more excited I got.

“The summer after my sophomore year, I got a co-op at Regal Beloit Corporation in Fort Wayne. My second rotation was in a metallurgy lab. My manager was super passionate and taught me as much as he could between working on the incoming projects. I loved that position. It erased any doubts I had left about pursuing metallurgy.”

The idea of working with joining materials also appealed to her since she grew up around her father, who is self-employed as a custom machinist and whose work frequently requires welding.

“Nothing is cooler than seeing something your dad designed and built work and do stuff. I've always thought welding was cool and wanted to learn more about it,” she said. “My co-op manager at Regal told me that welding engineers are in high demand so I'd never have to worry about finding a job.”

After graduating from Trine, she was offered a full-time job by Rolls-Royce in Indianapolis, but then was contacted by Stephen Liu, Ph.D., director of the Center for Welding, Joining & Coatings Research at the Colorado School of Mines. Ironically, Liu’s research is funded by Rolls-Royce.

“It was kind of fate, I guess,” she said. “Even though I got accepted to top-ranked materials research schools like Illinois and Michigan, I felt that Mines was a better fit since there was welding expertise and it is a small school like Trine.”

She was one of 24 students to receive a graduate fellowship from Tau Beta Pi, the engineering honor society, for 2016-17. Hasbrouck is enrolled in the Ph.D. track at CSM, but plans to complete a Master of Science degree along the way.

Brazing, Hasbrouck said, is one of the common permanent joining methods for materials — typically metallic materials — the others being soldering and welding. Like soldering, brazing joins pieces by melting a filler material into the joint, but brazing is performed at higher temperatures and requires a closer fit between the parts.

“A huge advantage of brazing is that it can successfully join two dissimilar materials without drastically reducing the mechanical properties of the joint,” she said.

Using a laser beam for brazing allows the energy to be focused on the filler material, thus allowing for higher-melting temperature filler materials, creating stronger joints.

She said right now she is doing preliminary work for the research and taking three courses in her master’s program, as well as serving as a teaching assistant in the welding lab. Eventually, most of her research time will be spent working with the laser, testing samples of SiC with different filler materials.

“This will involve a lot of playing with the laser because there are many laser parameters than can be changed for each and every filler material,” she said. “I do have some ideas of experiments to run based on other research, but not much on laser brazing for aerospace applications is out there.”

Once she finishes her Ph.D., Hasbrouck hopes to work as a welding/metallurgical engineer somewhere “that serves the national need - be it a national laboratory or industry or research.” She has already taken the first step toward becoming a licensed professional engineer by passing the Fundamentals of Engineering exam.

“My dream job would be working for Lockheed Martin's Skunkworks, which is basically where the majority of research for new military aircraft is performed,” she said.