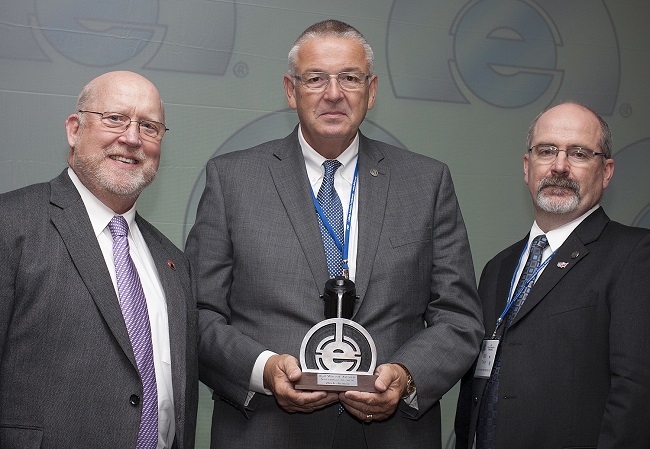 CHICAGO — Dr. Rick L. James, chairman of Metal Technologies Inc. and chairman of the Trine University board of trustees, was presented the E.J. Walsh Award by the Foundry Educational Foundation (FEF) at its annual College Industry Conference, held Nov. 17-18 at the Westin Michigan Avenue in downtown Chicago.

During the luncheon, James encouraged the students in attendance to take opportunities, but always give back as well.

“Being a philanthropist is just as important to me and my wife as my career and family are,” he said.

The Thomas Begel Scholarship honors Thomas Begel, the founder of TMB Industries. The Loper Award honors Dr. Carl R. Loper Jr., who served as an FEF Key Professor at the University of Wisconsin-Madison for more than 30 years.

The conference was attended by more than 300 industry executives, key professors, student delegates and FEF supporters.

Rick James, a 1977 business administration graduate from Tri-State University, now Trine, serves as chairman for Metal Technologies Inc. (MTI), a company he co-founded.  MTI employs 1,127 individuals. He has served on the board of directors for the Foundry Educational Foundation, which provides scholarship support to promising individuals who desire to enter the foundry industry, and has been named to the Board of Directors of the American Foundry Association.

Rick and his wife, Dr. Vicki L. James, have financially supported many efforts across northeast Indiana.

Trine’s University Center was named in honor of Rick and Vicki James in May 2012. They provide annual support to the Trine Fund and have financially supported The Metal Technologies Inc. Health and Fitness Center in Fred Zollner Athletic Stadium, a stadium suite in the Athletic Stadium and a flagpole near the football field, an additional house for use by Campus Christian House, the Jim and Joan Bock Center for Innovation and Biomedical Engineering, the T. Furth Center for Performing Arts, the Ford Hall renovation, Reiners Residence Hall, the expansion of Best Hall, and creation of the Books and Beyond Scholarship. They also led the way with a major gift for the recently announced Thunder Ice Arena and MTI Center.