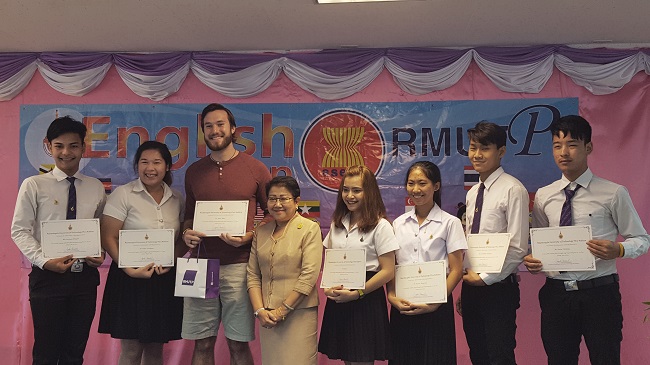 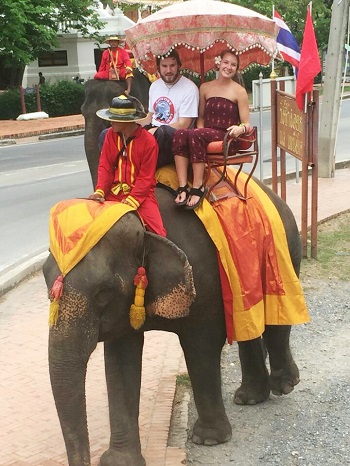 Elementary education major Adam Miller of Fort Wayne wanted to have an impact and experience other cultures.

Those desires took him to Thailand in May, where the Trine University student spent 17 days learning about the country and teaching English to college students there through the Thailand Summer English Camp Program.

“The end of my freshman year at Trine I asked Dr. Tony Kline if he knew of any trips abroad that I could go on and he told me about his friend at Ball State University, Dr. Kris Rugsaken, the director of the program,” Miller said. “It was too late for me to go on the trip that summer so I had to wait until the following summer to go.”

After a 23-hour plane ride, Miller arrived in Bangkok at midnight to 90-degree heat. He was part of a group of nine camp leaders from the United States who, along with Miller, included four Ball State students, two former Ball State professors, one of Miller’s high school friends, a campus minister from the University of Arkansas and a police officer from Little Rock.

“When we first got there we had a few free days to explore Bangkok on our own,” he said. “The other college students and I spent a lot of time walking around the city and going to flea markets. We haggled with a lot of merchants and tuk tuk (a type of Thai taxi) drivers.”

Miller was struck by how much English he saw in the country.

“Most of the signs had Thai and English,” he said. “I thought it was insane how prevalent English was in countries where English isn't their first language. I noticed the same in Japan.”

The camp began with a ceremony where the teachers met their students; Miller’s class was eight college students from Thailand and one from Bhutan. The group then drove to Pattaya, a beach town in Thailand, where they spent five days working together.

“We taught from 9 a.m. to 4 p.m. We worked a lot on pronunciation, sentence structure, vocabulary and the flow of conversation,” he said.

Miller said his biggest challenge was learning how to tailor his lessons to the varying skills of the students he taught.

“Some of them were much better at English than others,” he said. “I had to use the better students to try and explain, in English, what I was trying to convey. That way they could practice their skills and the lower student would have to try to decipher what they were saying.”

In the evening, Miller taught some of his students to swim.

“I will remember two students specifically, especially because we still chat from time to time,” Miller said. “Talob, a student from Bhutan, was very good at English. He and I would talk about rap music and American pop culture. He and I shared interests in groups like NWA and J. Cole. He included me when he hung out with his friends from Bhutan. Talob nicknamed me Topdun, which in Dzongkha means roughly "the most handsome man" — a great honor, he pointed out.

“Another student, Armm, was the most introverted of my students. Despite this, he tried to speak English every chance he got, even though he was my lowest ability student. He and I each ate scorpions on the famous Khao San Road. He and I still chat and play video games together.

“I ate the scorpion because I decided that I couldn’t leave Thailand without doing something crazy that would make a good story. I won’t ever do it again, though; it was definitely a one-time thing.”

At the end of the week, the camp had a party where students had to create a game and teach people how to play it in English. The group returned to Bangkok for a closing ceremony at Rajamangala University of Technology Phra Nakhon, and Miller gave his students gifts of playing cards and Nerds candy.

The group had two more days of sightseeing before they returned to the United States.

“We got to see the Grand Palace, the Temple of the Emerald Buddha, the Temple of the Reclining Buddha and many markets across the city,” Miller said. “We also went to a few ruins that were destroyed during the war Thailand was in with Burma, and they also took us to another province of Thailand where we got to ride elephants.”

Miller said the trip gave him some valuable lessons as he looks toward a teaching career.

“I had to learn to differentiate my teaching for my students, which is huge for elementary students in particular,” he said. “It taught me that you have to work as hard as the students, because if you don’t, they will not be able to grasp the difficult concepts.”

He also said he hopes to travel and teach in foreign countries again.

“Before the conclusion of the trip the president of Rajamangala University offered me a full-time position upon graduation from Trine, which I will greatly consider,” he said.