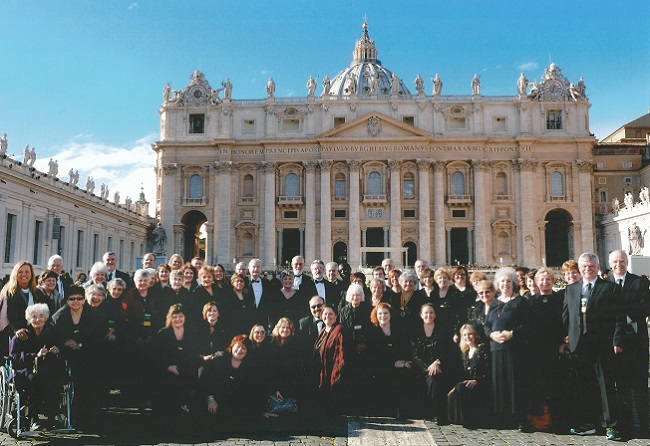 BARTONVILLE, Ill. — A 1967 Trine University alumnus was part of a 42-member choir that toured three cities in Italy at the beginning of this year.

Jack Nickels, who graduated with a degree in chemical engineering, said he has been singing in church choirs since age 16. He currently sings bass in the choir at Saint Anthony Catholic Church in Bartonville, Illinois.

“The director has made several trips with other choirs, but this was the first tour this choir had participated in,” Nickels said.

About half of the choir’s members were part of St. Anthony Parish. The church provided space for rehearsals.

“We practiced from May to December, sometimes three times a week,” he said. “We also had a Christmas Concert last December that was attended by about 700 people.”

Nickels said the trip marked the first time he has visited Italy.

“My first impression was how magnificent and how huge the basilicas are,” he said. “I was also impressed by the many structures that are very old.”

While in Italy the choir celebrated Mass and sang at the Church of All Saints in Florence and at the Basilica of St. Francis in Assisi. It also served as principal choir for the Sunday Mass at the Altar of the Chair in St. Peter’s Basilica in Florence.

“Being able to sing at these Basilicas in Italy was exceptional,” he said. “The figures and paintings are enormous. Many of them were done by famous artists. It was just humbling for me to be in such a wonderful place.”

He added he was also impressed by the response to the Mass.

“There is room beside the church pews for enough people to fill the church for the next Mass,” he said. “As soon as the current Mass is over, the people move to the center of the church and the people on the outside of the pews file in and the next Mass is started within five minutes. If you don't get there early enough to get in line, you are too late.”

The choir gave a public liturgical concert at the Church of St. Ignatius in Rome and sang with the Vatican Adult Choir and Vatican Children’s Choir during the Papal Mass, celebrated by Pope Francis, on the Feast of Epiphany of the Lord.

“For me to be at the Mass with Pope Francis alone was memorable enough. To be in one of the choirs singing for this Mass was something I will remember forever,” he said. “After the Mass we all gathered in the courtyard outside the Vatican and the Pope opened one of the windows of his apartment and addressed the crowd for about 30 minutes. Of course it was in Italian, so I didn't understand much of it.”

The group also had time to visit sites such as the Sistine Chapel and the basilicas of Christian Rome.

Nickels said he would like to sing again in Italy if given the opportunity.

“It depends on my health and my voice holding out,” he said.