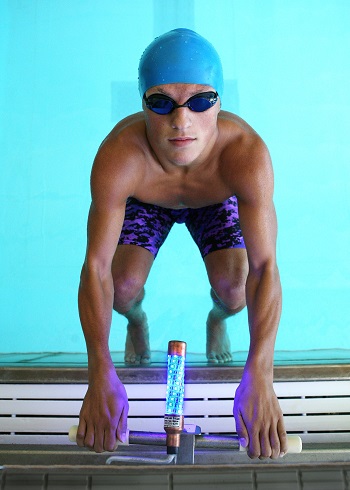 Swimming Reaction Lights of New York LLC and its partner, Trine University’s Innovation One incubator, were among the exhibitors at the 2016 United States Aquatic Sports Convention in Atlanta, Georgia.

The nation’s five major recognized water sports — water polo, diving, synchronizing swimming and master’s swimming — were part of the event, which included rules and regulation reviews and zone meetings as well as recognition for USA Swimming’s Swimmer of the Year. About 1,500 attended the event.

Though the company’s flagship product was originally developed to help hearing-impaired swimmers get a fair start in competition, Jason Blume, executive director of Innovation One, said the partners were there to promote Swimming Reaction Lights as a standard for the sport.

“The reality is today, through growth in usage of Swimming Reaction Lights, the National Federation of Swimming as well as other users have identified that if the product is used in just one lane for a hearing-impaired athlete it gives that athlete an advantage, due to the simple fact that light travels faster than sound,” Blume said.

Swimming Reaction Lights provides technologies for the sport of swimming that are designed to be friendly to those with disabilities and benefit all competitors. The company is a spin-off of S&C Aquatic Specialists LLC and was started in September 2014 by owner and operator Nick Santino, a leading provider of specialized swimming equipment in the state of New York.

Swimming Reaction Lights are manufactured and shipped by Innovation One at Trine University in Angola, Indiana, the first product to be commercialized through Trine’s Innovation One incubator. The product was launched initially in New York and Indiana and is expanding to a nationwide market.

On April 1, Reaction Lights will introduce a starting light system for track and field, and the company has similar products planned for other sports.