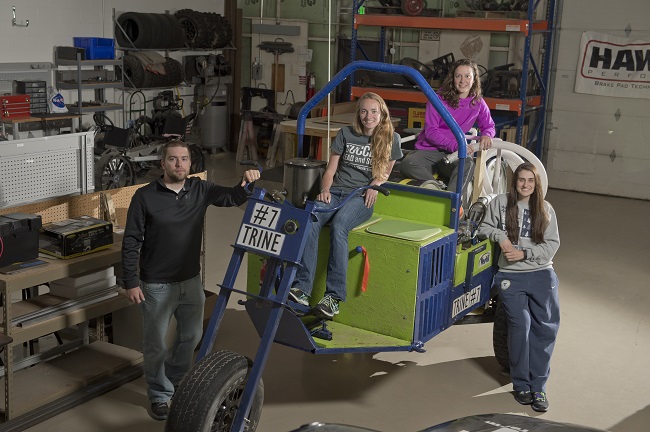 Competitors were tasked with building a vehicle that could hypothetically be used in a developing African country to perform daily tasks over rough terrain. This year’s challenge included the added requirement of incorporating a system to pump water into and out of three 55-gallon barrels.

The Trine group built their own vehicle from scratch.

“Most teams didn’t really redesign an entire vehicle,” said Copple. “They would just redesign a few components on their vehicle and improve it as the years go on.”

“The first semester was all analytical design. We did a CAD model, crunched numbers and equations and basically just got the main concepts down and decided what our best route would be,” said Rabel. “This semester we went through the manufacturing process of cutting the steel, gluing PVC pipe together and bolting things down to steel — and lots of welding.”

The contest itself was an eight-hour endurance race where teams traveled around a two-mile course emptying and refilling barrels. McCarrell said the purpose of the event is to help develop new ideas for vehicles that actually are produced and sent to Africa.

“We had the only hydraulically driven vehicle,” said McCarrell. “It was different to see how our vehicle ran as opposed to how others operated.”

Though the team didn’t finish as well as they would have liked, they said it provided a learning experience. For Forsythe, who will go to work for Honda Motor Company in engine research following graduation, the project also offered insight into her future career.

“It was kind of interesting just to build a vehicle,” she said, adding, “It was cool to build our own vehicle from scratch.”