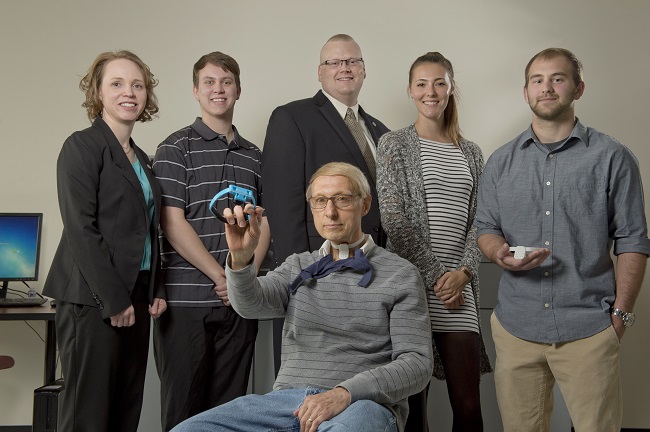 A project developed by three students in Trine University’s Introduction to Biomedical Engineering class will make life easier for an Angola man who lost his vocal chords and voice box.

Dr. Stephen White, who works as an optometrist at the Angola Walmart, had his throat crushed in an accident 23 years ago, resulting in paralyzed vocal chords. As a result he eventually developed throat cancer and had a laryngectomy in November 2014.

White speaks using a hands-free device in a stoma (hole) in his throat. However, he found he had issues with the device falling out, and it was inconvenient to have to push the device in order to talk.

He worked on a band to try and keep the device in place, and his nephew designed an improved version for him to use. He eventually contacted Innovation One at Trine University to try to get the band printed on the facility’s 3-D printers.

In turn, Jason Blume, executive director of Innovation One, reached out to Maria Gerschutz, Ph.D., chair of Trine’s Biomedical Engineering Department, to see if Trine students could improve on that design.

“I just thought that this was a great opportunity to do a project with an application and benefit in the real world, and she identified a class group,” Blume said.

Gershutz gave the project to sophomores Austin Crouse of Pendleton and Nathan Kell from Morristown, along with freshman Syndey Schlafer from Fishers. Gerschutz said the group did a research report on White’s condition and the clinical history behind the necessity of the band.

“As part of their project they also designed the band,” she said.

“We looked at some previous files, some previous prostheses that Mr. White’s nephew had designed for him,” Kell said. “We got some measurements for those. After we had a basic idea of exactly what the dimensions were and what we were supposed to be doing, we met with Mr. White and talked to him about some of his preferences.”

Improvements to the original design included making a flap on the front of the band removable, enabling White to use the band with both the hands-free device and the heat moisture environment (HME) he uses in its place when he doesn’t need to talk. The students also devised a new way to get the band around his neck so that the band didn’t break, as previous versions had done.

White said he is “overjoyed” with the final product, which the students officially presented to him on Friday.

“I’ve been working on this since February 2015 and this looks it’s going to work,” he said. “They’ve done a really good job.”

The students said it was “awesome” to see White be able to benefit from their work.

“For me personally, this is what I want to be doing when I graduate from Trine,” said Kell. “I plan to go to graduate school, but after that I would like to work at a practice where I get to meet patients, figure out what their needs are and work with them. This was just a really good experience to reassure myself this is exactly what I want to do.”

“When you can apply what’s in a class to make a difference in someone’s life — that’s incredible,” said Earl D. Brooks II, Ph.D., president of Trine University. “These types of projects are a win-win for Trine University students, Innovation One and the community at large.”

“Jason Blume and I are both proud of these three students and how far they’ve come,” Gerschutz said. “They’ve done a wonderful job, and I’m glad to see that their customer’s happy too."

It’s not the first Innovation One project that has had an impact on a client’s quality of life. In 2013, a hands-free, automatic shower system developed by Trine University’s Innovation One and a team of engineering students was installed in the home of Terry Haffner, a Fort Wayne resident and artist who was born without arms and with partial legs.