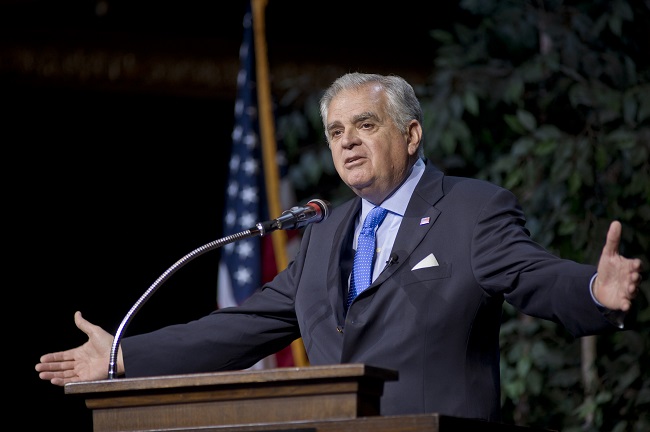 ANGOLA — If America is going to move forward, elected officials are going to have to work together to get things done.

That theme was hammered home by former congressman and United States Department of Transportation Secretary Raymond H. “Ray” LaHood during the Distinguished Speaker Series on Monday at Trine University.

Speaking in the T. Furth Center for Performing Arts on the topic of “Seeking Bipartisanship,” LaHood said the public is frustrated that things are not getting accomplished in government, citing historically low approval ratings. He said that has played into the hands of candidates like Republican presidential contender Donald Trump.

“The American people think that Congress really doesn’t do much. It doesn’t really solve problems. Whether you like Trump or not, I think that’s what he’s tapped into,” he said.

As an example, LaHood cited the announcement by Senate Majority Leader Mitch McConnell the day after the death of Supreme Court Justice Antonin Scalia that the Senate would not consider holding hearings for any nominee to the high court.

“The people are saying, ‘What’s going on? How come they (Congress) are not doing their job?” LaHood said.

LaHood contrasted the current gridlock to when he served as the U.S. House representative for the 18th District of Illinois. Elected in 1994 along with other Republicans in a result giving that party control of the House for the first time in 40 years, LaHood said that despite differences with then-President Bill Clinton, the Republicans in Congress were still able to work with him.

“The difference between now and back then is (U.S. House Speaker Newt) Gingrich and Clinton came to Washington to get things done,” LaHood said. “Even though they didn’t agree on much, during that period we passed three balanced budgets, we passed tax reform, we passed welfare reform, we passed two transportation bills, with a Republican Congress and a Democratic administration. Why? Because both of these men, both of these leaders, knew why they were in Washington.

“We had people who wanted to get things done and were willing to sit down and talk with one another. People with very, very different views politically and philosophically but with one view that government needs to solve problems, and that’s the difference. We don’t really have that today. And that’s why people are frustrated. That’s what we need to get back to in America.”

LaHood said that desire to work together played a part in his decision to serve on the Cabinet for President Barack Obama from 2009 to 2013. Obama, LaHood said, reached out to him a few days after being elected Senator for Illinois to discuss how the two could work together to benefit their state.

“I believe this idea of bipartisanship and working together is in Barack Obama’s DNA. President Obama, when he was a Senator, really worked with all of us in our delegation for Illinois,” LaHood said. “For that two-year period, while he was a Senator and I was in Congress, we worked together for Illinois in a bipartisan way.”

Responding to audience questions after his formal presentation, LaHood encouraged those in attendance to vote in the upcoming primary elections for those who believe that government can be used to make positive changes.

Early in his address, LaHood — whose brother Steve is a Trine alumnus and trustee — also encouraged Trine students in attendance to make the most of their opportunities, noting that his interest in politics didn’t begin until after he’d graduated college and started a teaching career.