Students in this spring’s ENG 233 Mythology class at Trine University contributed to "Tales from Mythology Spring 2016," an eBook available on several platforms. 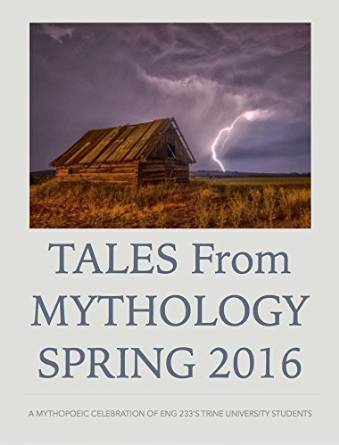 The book is a collection of student-created myths from the class. Students were assigned the project of creating their own myth, with encouragement to explain something about Trine's campus in the process. The result is pieces about gargoyles on Taylor Hall, origins of fraternity houses and more.

Once finished, Dr. Cassandra Bausman, who teaches the class, compiled their work into a printed document for them.

"It felt wrong to have my students write myths as an assignment that would only live in a drop box," she said.

Basuman says a focus of class was of the power of mythology to change its form.

"We spent a lot of time in class talking about the life, the liveliness, of mythology," she said, "understanding it as a living, oral form, thinking through its continued relevance and prevalence, and recognizing it as an important cultural inheritance that continues to thrive because of how it is continuously transmitted and transmuted by an endless procession of tales and tellers. We simply had to share them and get in on the game we'd observed all semester!"

The end result is a collection of 22 myths by students ranging in major from electrical engineering to professional writing and English studies. The eBook is now available through Apple's iBooks or Amazon's Kindle platforms. While the iBooks version is free, the Kindle version costs $0.99 due to restrictions by Amazon.

Bausman cites the importance of modern myth in our culture with creators such as Tolkien, Chris Cater, J.K. Rowling, George Lucas and others.

"Mythology matters because it's always been a way of understanding the world," she noted. "It's a powerful way of making meaning, asking questions and seeking answers to universal human concerns. This is especially true as popular works of science fiction, fantasy, romance, horror and pop cultural forms, from film and video games to advertisements, continue to incorporate and interpret the images and ideals of myth."

She concluded, "Any literary or cultural experience is impoverished without a familiarity with it."