From the mob to the moon 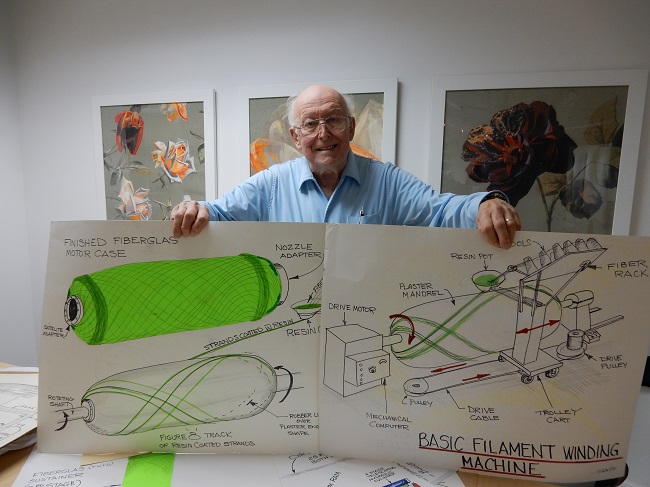 “We think our group with Hercules (Powder Company) became the first composites engineers,” said Conte, 1959 BSME. “That term had never existed before.”

It’s one of the many firsts in a story of the early space program, a story that begins with the don of an Italian bootlegging mob in the Great Depression, with Conte’s education at Trine University’s predecessor playing a pivotal role.

The don was Conte’s great-uncle, who wanted to distance his family from the past and pushed young “Sammy” to earn a college degree, taking great pleasure in following his formal education. Conte’s parents were the first in each of their families born in the United States — he said one of his grandparents had been born in a potato field in Europe — and, though hard-working, only attended school through eighth and ninth grade.

“(My uncle’s) goal was to get some member of the family formally educated,” Conte said.

Unfortunately, Conte struggled in school in New Jersey. Though a talented draftsman/illustrator, he had difficulty in subjects like math and chemistry.

“It was like chemistry was a foreign language in hieroglyphics taught on the moon,” he said.

High school counselors told Conte he needed to give up on college and learn a trade, but he enrolled at Trenton Junior College in engineering.

“I was very successful the first year but totally bombed the second year because I hit chemistry and calculus like a brick wall,” he said.

He took summer courses to make up the second year, earning an associate’s degree in materials. However, he’d run out of money and was hit with rejections when he applied to four-year colleges.

“Every school I applied to said, ‘No you don’t have the grades,’ ” he said. “They wanted me to repeat the whole junior college experience. I added up the money and thought, ‘No, this ain’t gonna work.’ “

He went to work for a company in Trenton as an engineer’s aide, running calculations for the engineers on mechanical calculators. One of the project engineers, Al Mikolajczyk, took an interest in Conte and told him about Tri-State, where Mikolajczyk had earned his BSME degree in 1954.

“God bless him, he never stopped pushing me toward Tri-State, knowing that I had no other options,” Conte said.

Conte was accepted at Tri-State, and in 1957 jumped into the street rod he had built and headed to Indiana, listening repeatedly to Pat Boone’s “April Love” – the only song he could pick up on the radio during most of the drive.

“I was the second one in my family to ever go west of Pennsylvania,” he said.

Tri-State’s grassy campus was a new experience — the only grass he’d seen in New Jersey grew in the cracks in the sidewalks, he said. He met students from all over the country and was able to finally pass chemistry thanks to a professor who let Conte use his illustration skills in reports to describe the chemical processes.

He graduated after taking an extra semester, finishing 151st out of 152 in Tri-State’s Class of 1959. His parents and family on both sides — and particularly his great-uncle, the don — were thrilled.

“My father took me to see Don Grande Zio Severio, who had a small yard (where) he held court under a fig tree,” Conte said. “I put the two degrees down, one from junior college and the one from Tri-State. He says, ‘You make me proud. You do del tuto familia (the whole family) proud.’ ”

Unfortunately, the U.S. economy had entered a recession in 1958 and jobs were hard to come by. Back in New Jersey, Conte struggled finding places to apply, and once he did, getting potential employers to look past his low class standing. Eventually, a newspaper ad for a company in nearby Rocky Hill, a 300-year-old village made up of homes and farms, caught his eye.

Conte was intrigued, and a bit confused.

“A factory in Rocky Hill. That’s like saying there’s a General Motors plant in Angola,” he said. “You know that doesn’t fit.”

He arrived for an interview at a huge manufacturing facility surrounded by a barbed wire fence and met for the interview in a part of the plant still under construction. His interviewer was interested in the young engineer’s illustration skill and the work he had done with non-ferrous materials, but evasive on what exactly the factory produced – only mentioning that the company was in the process of being purchased by its biggest customer, Hercules Powder Company.

“I’m in Rocky Hill, New Jersey, for God’s sake, in a plant that doesn’t exist, growing like crazy,” Conte recalled. “You’re talking to me on a dirt floor, you won’t tell me what you do, but you’re being bought out by Hercules Powder.”

However, “he shot me a wage and honest to God I about passed out. Up until now I had never talked to anybody about a wage. I never got that far.”

Still confused about what he would be doing, Conte reported for work the next Monday at Young Development Laboratories and was interviewed by owner Dick Young. Conte was not allowed to take notes as Young described his filament wound fiberglass (FWF) process the company was using to manufacture solid-fuel engines for missiles and to launch rockets into space.

With demand building because of the space race with the Soviet Union, the company was constantly working on ways to keep up. Conte was part of a team that designed a machine to make the rocket engine cases — a task that earned him Secret clearance from the U.S. government — using a mechanical computer for timing because resin used in the process was harmful to electronics.

“Nothing was impossible. Remember this was the slide rule era before PC computers, electronic calculators, etc.,” Conte said. “We needed a mechanical computer – okay, we created one.”

Another project took Conte to Wilmington, Delaware, to work briefly with a group attempting to design a foot pad for the lunar lander. In 1960 he was transferred to Wilmington full-time, but the 70-mile drive from his home and the secrecy of his work began to wear on him.

He left Hercules and began working at a new plant near Philadelphia owned by Electro-Nite Carbon Co., which was developing heat-resistant items using carbon graphite. Conte worked with another engineer there to create carbon graphite nozzles for rockets, and discovered a huge demand for them.

“I was back in the rocket business,” he said. “We were making a ton of money and I didn’t have to worry about the degree of secrecy.”

He returned to Indiana in 1968 after a carbon graphite piston ring material he developed attracted the attention of a Fort Wayne company that asked him to come aboard. He has remained in the area since, working at various companies on projects including products for aircraft and fireproof materials contract furniture for hospitals and casinos.

For 37 years he has taught aerospace science for the Indiana Civil Air Patrol and continues to teach local squadron classes in Fort Wayne and the Hoosier Warbird Museum in Auburn. He is still working on some pending patents and serves as a consulting composites engineer.

He and wife Carol, whom he met while attending Tri-State, have four children.

He taught at Tri-State in 1984 and 1985 and still carries many fond memories of faculty who helped him through college, like Ray Hemmert in mechanical engineering, Carl Becker in mathematics and Ray Hawthorne in aerospace.

“If you didn’t understand (Hemmert) would stop the class,” Conte recalled, “and we’d go back over it. Thank God! He just cared about us.”

“Those are the kind of instructors that are legend,” Conte said. “That’s my Tri-State!”