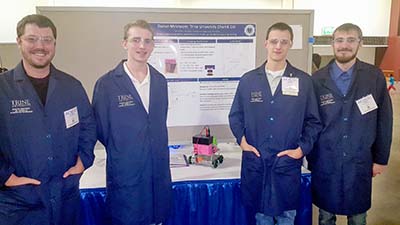 MINNEAPOLIS — A team of Trine University chemical engineering students placed sixth at an international competition to build a car that starts and stops using only chemical reactions.

Forty-one colleges from around the world competed in the 19th Annual Chem-E-Car Competition, held the weekend of Oct. 28 in conjunction with the American Institute of Chemical Engineers (AIChE) annual meeting in Minneapolis.

“Many of the other schools competing have been working on their cars for more than five years, but Trine has put together a highly competitive car with under two years of experience,” said Amanda P. Malefyt, Ph.D., associate professor and chair of the McKetta Department of Chemical & Bioprocess Engineering at Trine University. “We are extremely proud of the team’s performance in the national competition and delighted for such a high finish.”

Teams had to design the car to travel between 15 and 30 meters and carry a load of 0 to 500 grams of water, with the exact distance and load not specified until during the actual competition. Power and stopping mechanisms had to be students’ own original design.

The students then quickly calculated the appropriate chemical reaction. They were given two attempts to propel the cars as close as possible to the finish line.

The Trine team finished their best run 23 centimeters away from the target to earn the university’s highest finish in national competition. The team was successful despite having to improvise after leaving a key component for their car back in the lab at Trine.

“They scoured the local Target and CVS to find a ‘MacGyver’-type replacement the night before the competition so they could compete,” Malefyt said. “They ended up using a make-up concealer bottle as a replacement cuvette for their stopping mechanism. It was an impressive comeback and a great teamwork and problem-solving experience.”

The Trine team's introductory video from the competition is available on YouTube.