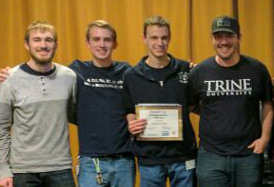 CHICAGO — A group of chemical engineering students from Trine University took part in competitions at the North-Central Student Regional Conference of the American Institute of Chemical Engineers (AIChE).

The event was held April 7-8 at the Illinois Institute of Technology in Chicago.

Trine’s ChemE Car team qualified for national competition after placing third in poster competition and fifth in car competition. The team — consisting of Jedidiah Bowen, a junior from Hamilton; Daniel Barzycki, a junior from Hebron; Roger Chase, a junior from Fort Wayne; and Ryan Kosek, a sophomore from South Bend — will compete at AIChE’s National Student Conference over the weekend of Oct. 28 in Minneapolis.

This is the second year in a row the ChemE Car team from Trine has qualified for national competition.

In the ChemE Car competition, teams of students must build a small “car,” about the size of a shoebox, powered by a chemical reaction and stopped by a change in chemical concentrations. The team has to design the car to travel between 15 and 30 meters and carry a load of 0 to 500 grams of water, with the exact distance and load not specified until during the actual competition. Power and stopping mechanisms must be students’ own original design.

For the poster competition, each team makes a poster to present on the mechanisms of their car, any unique features their car has, and safety considerations.

For the distance competition, each team is given two hours to get their car ready to run, with teams learning the specified distance and load — in this case, 18 meters and 500 grams — after the first hour. During the actual competition each car is given two minutes to go from the start line to a complete stop. After the first run there is a half-hour prep time and every team is given a second attempt. The performance of each car is determined by how close to the stopping line the car is when it stops.

The Trine car finished about 3.2 meters away from the line.

A team made up of seniors Nicole Walters, from Sunbury, Ohio; Josh Marty, from Clyde, Ohio; Josh Simmons, from Wyandotte, Michigan; and Madison Fain, from Connersville, finished third out of nine teams in ChemE Jeopardy.

In the ChemE Jeopardy competition teams participate in a single-elimination Jeopardy-style trivia contest. For each bout, three teams go head-to-head with two rounds of questions and a final Jeopardy.

Senior Jordan Tinkle of Shelbyville and Walters took part in the research poster competition, presenting a poster on their honors project at Trine, titled “CRISPR-Cas9 Inhibition of Inositol-Requiring Enzyme 1 (IRE-1) in Human Colon Cancer Cells.” For their project, the pair conducted an experiment on cultured cells to test a method that could prevent cancer cells from growing. The results of their experiment confirmed the findings of a research team at Michigan State University.