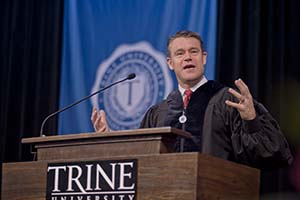 A celebration of new beginnings for graduates also marked many firsts for Trine University as it honored the nearly 1,000 members of its Class of 2017 at Commencement ceremonies on May 13.

Beautiful spring weather and sunshine welcomed more than 5,500 to campus for the event, with more than 700 of the 999 eligible graduating seniors participating in the program. The group included the university’s first-ever doctoral degree graduates, as Trine’s first Doctor of Physical Therapy (DPT) class crossed the stage.

The Commission on Accreditation in Physical Therapy Education (CAPTE) officially informed the university May 10 that Trine’s DPT program had been accredited.

“The word commencement means a new beginning. You achieved a significant new beginning and that alone is a cause for celebration,” Trine President Earl D. Brooks II, Ph.D., said in welcoming the graduates. “The new opportunities that will present themselves because of your new beginning are cause for a celebration on this special day. But perhaps the greatest celebration is that you’ve arrived at this moment.”

The day also was a first for Indiana Sen. Todd Young, who told the graduates he was giving his first commencement address and joked that he had sought advice from his teenage daughter and staff members on what to speak about.

Young charged Trine’s Class of 2017 to look outside their own interests and “breathe life back into the notion of the ‘common good.’ “

“Rather than allowing ideological labels to guide our path, we should instead be guided by what we in Indiana call Hoosier common sense,” he said. “It’s the notion that we should be guided by the facts, and that we are open to change or new ideas, regardless of ideology, when confronted with results.”

“If our individual happiness is linked to one another’s happiness, then each of us has a purpose in life to preserve for the living and future generations a social order that is conducive to a happy life for all,” Young said. “Indeed, as college graduates and our nation’s future leaders, it is your duty to help preserve this social order.”

Young was presented an honorary Doctor of Public Service degree by the university following his address.

Delivering the response from the Class of 2017, Nicole Walters, a chemical engineering graduate from Sunbury, Ohio, the Robert B. Stewart Award winner, told those gathered, “Your worth comes from who you are, not from what you’ve done or what’s been done to you.”

“Don’t give up on your dreams,” she said. “Make your life worth living and do something that you’re going to be happy with. Be intentional with your time and with your life. Don’t let it slip away and be sure to live out your worth.”

Brooks echoed that theme in closing, noting that the graduates were joining more than 31,000 Trine alumni “whose many achievements and contributions speak well to the experiences at this university.”

“Remember your degree is not an end but rather a beginning, a catalyst for the inception of what you will become,” he said.

“Your alma mater has given you the seeds of knowledge and training. You must nurture them, allowing them to grow, fed by experience, motivation and thoughtful decision making. You’re now faced with the awesome responsibility of making those choices that will determine who you are to become. Make those choices wisely. … Take charge of yourself and build your own successes.”

Trine University expects to enroll another record-breaking class of incoming freshmen in the fall.