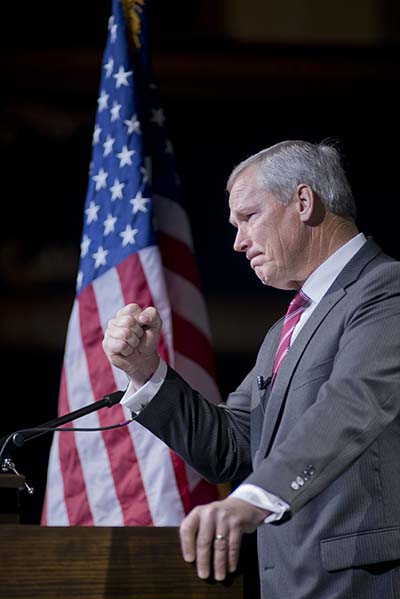 In a poignant and often emotional presentation, retired Major General Michael S. Repass reminded the Trine University community of the human toll of the Sept. 11, 2001, terrorist attacks and reflected on how the nation has changed since then.

Held in the T. Furth Center for Performing Arts on the 16th anniversary of the attacks, the opening session of the university’s Distinguished Speaker Series was a remembrance of those who lost their lives that day.

“For all of us sitting here today and for all Americans, Sept. 11, 2001, forever changed our world,” Trine President Earl D. Brooks, Ph.D., said in opening remarks. “Even today, 16 years later, it’s hard to make sense of the senselessness.”

Following the presentation of colors by the Trine University Air Force ROTC and the singing of the National Anthem by the University Choir, Repass, who spent more than 30 years as a Special Forces officer in the Army, shared facts about the 9/11 attacks as well as his recollection of the day.

At the time, Repass was stationed at Special Operations Command in Tampa, Florida, where he had served since 2000. Having passed the 20-year mark of his military career, he said he was considering retirement.

Repass shared the stories of some of those killed in the attacks, including Rick Rescorla, director of security for Morgan Stanley at the World Trade Center. A decorated Vietnam War veteran, Rescorla had anticipated an attack on the Twin Towers and implemented evacuation procedures ahead of the attacks credited with saving many lives. He died while leading evacuees through the South Tower.

“He was valorous through his adult life until his last breath,” Repass said.

The perpetrators of the attacks, Repass said, “built nothing. They’ve left destruction in their path. … Extremists all over the world have sought to destroy governments, societies, cultures and religions, yet none have articulated a viable vision of what they want to replace it.”

“There is a segment of the world that would very much like to visit violence upon us when and where they can,” he continued. “They want to destroy our way of life. For most of us who have served and are serving, this has never been far from our minds.”

In reflecting how his life has changed since 9/11, Repass said, “I’ve built clinics and dropped bombs. I’ve saved hostages and I’ve killed very bad people. I’ve walked in silent awe among casual heroes. … I saw pure evil and unquenchable hatred in those who wished to kill us and their own citizens who didn’t think or act or worship like them.”

Choking back tears, he continued, “I’ve lost friends and subordinates. I’ve buried 25 soldiers across the United States. Each one of those ceremonies tore a piece from my soul that will never be quite healed.

“I will be eternally struck by the number of times that I spoke to families about their loved ones and often heard the question, ‘Was it worth it?’ I can’t answer that sufficiently for them. Sometimes there are no words. I doubt anything would have been worth it at that moment. However, their fallen soldier made a difference to me, to those that served on his or her left and right, and to those whom he encountered trying to make their lives better. Moreover, he represented an ideal. She represented America, and what is good in our nation and world.”

Repass said many veterans have taken time since 9/11 to evaluate what is important.

“Faith, flag, family, friends and future all seem to have a much more appealing side to them today,” he said. “I’ve noticed that all these are intangible concepts and they have immense draw to me. I just don’t care anymore about tangible things.”

He told the students in attendance that despite the challenges the United States still faces, “Our nation, our society is very resilient. We’ll always have happier times, better times. I envy your youth and the challenges ahead.”

He closed by challenging students to “make a difference out there, not only to yourself but to those you love, your family, your friends and to your community. I wish you Godspeed and good luck out there. It’s great to be in America. God bless our nation, those who protect us and our way of life.”

A question-and-answer session followed, during which Angola Mayor Richard Hickman thanked Repass for his service to the country and for sharing his insights, and the presentation closed with the University Choir singing “God Bless America.”

The next Distinguished Speaker Series will be held at 10 a.m. Oct. 30 in the Furth Center and will feature Sue Ellspermann, Ph.D., president of Ivy Tech Community College and former lieutenant governor of Indiana.