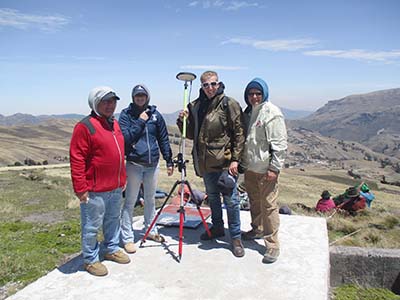 With only a simple system of pipes and tanks, the people of Comuna Guangaje in Ecuador often struggle to get clean water.

Members of the Trine University Engineers Without Borders (EWB) chapter traveled to the village in September to help work on a better solution.

“The community consists of about 400 indigenous people who are mostly poor farmers,” said Tyler. “They had a simple water system installed about 10 years ago that consisted of a pipe network and some tanks that connect existing springs to the people’s homes. The water is not treated and flows only by gravity to their homes. Unfortunately, some of the springs run dry at times and the system is not very efficient, so they frequently have to carry water from a distance.”

After the community applied for help from EWB, the organization’s national review board approved the project. EWB awarded it to the Indianapolis Chapter, which invited Trine’s student chapter to be a partner.

“The project itself was something I already prefer to study,” said Plantz, who has a focus on environmental engineering and hopes to pursue a career in that field. “I also thought it would be an amazing opportunity to use the skills that I am good at to benefit an entire community.”

The group left for Ecuador on Sept. 17 and stayed for two days in Quito to get used to the altitude, then drove to Comuna Guangaje, where they stayed four days.

Whitehead said that in addition to noticing a difference in breathing, he initially was struck by the scenery in Ecuador.

“The mountains, volcanoes and landscape of Ecuador were gorgeous everywhere I looked,” he said.

Romanowski said the group received a heroes’ welcome when they arrived in the village.

“The entire community ran out of their village with flowers, traditional festival costumes and hugs to greet us,” he said.

“Even the smallest children wanted to shake my hand,” Plantz said.

The group stayed in the local community building, sleeping in sleeping bags and eating food cooked by community members.

“Our very first meal was potato soup with a leg of guinea pig!” said Tyler. “Tough but tastes a little like chicken.”

While there, the team split up, with some members surveying existing springs and structures using GPS equipment and others interviewing residents about their water usage — with questions translated from English to Spanish to Quichua. The team also tested water for coliform bacteria, and located new sources of water and tested those.

“It is surprising how much you can learn from being a stranger in someone's world,” said Plantz. “It gives you a different perspective on the everyday things you take for granted or things you miss because of what you have.”

Whitehead said that in addition to giving him a perspective on life in another country, the experience helped him develop teamwork and problem-solving skills.

“Spending a week in a remote location with the same group of people working toward the same goal is a fantastic way to develop personal skills,” he said. “Everyone is relying on each other to fulfill their responsibilities.”

Favorite memories for Romanowski include playing soccer with the younger boys and large groups from the village coming to watch the team do its work. He also said he will remember the difficulty breathing, harsh weather and rough environment of the area.

“All of these stick in my mind, which not only makes me happy that I was able to experience it for myself, but also able to help those who truly need and deserve it,” he said.

The next phase of the project is for Trine engineering students to work with the Indianapolis Chapter to design several alternatives for a new system and select one that meets all the needs of the community — Plantz and Whitehead will be part of a group working on this phase for their senior design project. Once the final design is approved, another team will go to Ecuador to assist with construction.

“Some of us who went on this trip will return, but other students will get to the opportunity to go as well,” said Tyler.

The construction trip is planned for fall 2018.

In the meantime, the group will focus on raising funds to buy the materials needed to construct the new water system. Those interested in contributing to the project can email trine.ewb@live.com.

“All in all this was an excellent trip,” said Tyler. “We were able to see a part of the world and its people that we would never have experienced otherwise. Most importantly, we will be able to help people who live so far below our standard of living that it could make you cry.”