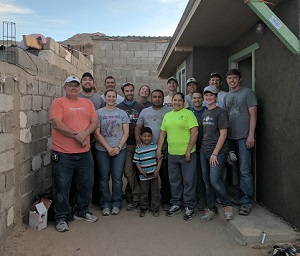 It may be cliché, Grant Klopfenstein said, but it’s still true: A group from Christian Campus House (CCH) at Trine University that served in Mexico was impacted as much as those they were serving.

“It made you question how you live or how you think you need to live, because these people have nothing,” the senior from Howell, Michigan, said. “And they’re smiling and greeting us and happy to see us. It’s just amazing the joy they had.”

From March 11-17, over Trine’s spring break, CCH took a group of 24 — 21 students, two staff and a parent — to Juarez, Mexico, to build two homes through Casas Por Cristo, which seeks to provide housing for families in need alongside local churches.

Jordan Childress, associate campus minister for CCH, said the trip is part of a rotation of spring break ministry opportunities for Trine students.

“Every student will have an opportunity to go build with Casas at some point in their four years at Trine,” he said.

Team members raised their own support in the fall semester by reaching out to friends, family and church supporters. The group also did community fundraisers that covered the costs of the materials for both houses and for Bibles, pots and pans, box fans, dishes and more.

The group traveled two days by van each way and worked for three days, with half the group working on each house. With assistance from the families, the team did everything from pouring foundations and building walls to installing insulation, drywall and electric power, covering the outside with stucco and installing metal roofs, leaving the family to paint the home as they wanted.

“We built from the ground up, beginning with nothing on the build site and ending with a nearly finished home,” said Childress.

“I was so proud of everyone for working hard and maintaining a positive attitude, even when we were exhausted,” said Meghan Ulrich, a senior from Milan, Michigan. “It was really fun learning how to build a home and tangibly serving someone.”

“It was such a point of pride for me to see everyone giving their absolute all and people being exhausted at the end of the night,” said Klopfenstein. “People were wanting to go to bed at nine o’clock just because they worked so hard.”

Klopfenstein was especially moved by the family his group served. The team built a 400-square-foot house for a mother with five children; the woman gave birth to her first child at age 13 after being sexually assaulted.

“They were so thankful to have a roof for her and her children,” he said. 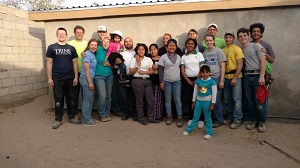 “Our trip served two purposes, to provide a home and to build relationships with the family members and show them the love of Jesus,” said Childress.

At the end of the days of building, the group held a dedication service to hand over the keys to the houses. Klopfenstein said members of the group who spoke Spanish served as translators.

“We got to share with them why we were there and try to share God’s love with them and say, ‘We care about you and your well-being,’ ” he said. “That was the most special moment for the group.”

Ulrich said it meant a lot that her father accompanied the group on the trip for his first mission experience.

“He has a heart for serving people, and I could tell that he enjoyed himself,” she said. “It was great that he was able to use his gifts and abilities to help us.”

Klopfenstein said it was an “incredible trip” that has motivated him to do more to help others at home.

“We can do this here all the time in terms of being a neighbor,” he said.