The Overwhelming Odds reunite at Trine 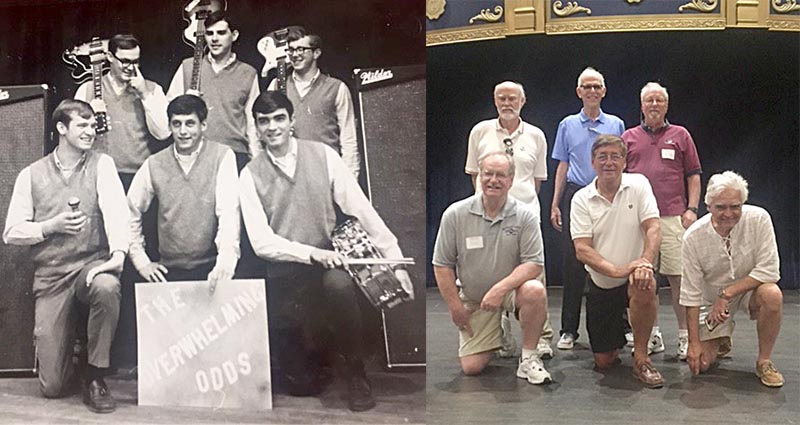 Members of a band that formed at Tri-State College and played in the area during the 1960s recently reunited at Trine University.

The group began with Paul, George, Jack and a drummer named Dad. Its name, George said, came from the makeup of the student body at Tri-State – the fall 1964 enrollment included only five female students out of 1720 total enrolled, overwhelming odds for any guy looking for a date.

The next year Tom joined as vocalist and Doug replaced Dad on drums. Later they added a keyboard player, Herbie May, who was replaced by John after Herbie left school.

“I was a freshman and was going to the cafeteria to have dinner one evening. I heard music coming from the auditorium and went in to check it out,” he said. “The Overwhelming Odds (five of them) were practicing. They were excellent musicians. Their music was awesome and I enjoyed listening to them very much.”

John listened in on several more rehearsals, then one day struck up a conversation with George, who offered to teach him the guitar.

When he returned to Tri-State in the fall of 1965 John performed with two fraternity brothers who played the drums and saxophone, but still thought about the Odds. Since that group already had guitarists, he asked if he could join if he learned the keyboard.

“My younger sister was an organ player and she had a portable organ she let me use. I transferred what I learned on the guitar to the organ,” John said. “In the fall of 1966 I showed up at the Overwhelming Odds practice and said, ‘Here I am.’ ”

With the six in place, the band played at fraternity parties for free “refreshments” but no pay. As the Odds got more proficient, they started playing for money at places like Defiance College in Ohio and Olivet College in Michigan.

“We were told it was an ice cream social,” Jack said of the performance at Olivet. “Clearly not our cup of tea, but we had a great time and the crowd loved us.”

They eventually got a job playing at Stark's Star Light Inn in Bryan, Ohio, where they were the house band playing weekends from 9 p.m. to 1 a.m.

“At that time you could drink 3.2 percent beer in Ohio at age 18, so it was a popular place for Indiana kids,” John said. “For our services each of us was paid $75. As a college student that was some pretty big money.”

The band played the hit songs of the mid-’60s by groups like the Young Rascals, Vanilla Fudge, The Kingsmen, The McCoys and The Beatles and also did quite a few Motown songs.

“George was at the core and did a great job of putting the pieces together,” Jack said. “We were loud and easy to dance to.”

After Sunday night at the Star Light, they would pack up their equipment and travel back to Tri-State, where they rehearsed and learned new songs practicing in the auditorium then located on the upper floor of the engineering building.

“I can’t remember how I did it all but we had fun and I got my degree,” Jack said. “I learned a lot about the value of camaraderie, teamwork and friendship through the experience. We always got along.”

After the spring semester of 1968 Jack and Paul graduated and Tom joined the Navy. The remaining three members picked up a bass player who also served as lead singer and continued to play at the Star Light, but John said it wasn’t the same.

“For some strange reason no one contacted each other. We were too focused on our careers, getting married and raising our kids,” John said. “My family certainly heard a lot about the Overwhelming Odds and the great music we made, but it was only a memory.”

John said he kept a reel-to-reel tape recording the group had made at a practice and had it transferred to a CD less than a year ago.

“For the first time in 50 years I heard the music of the Overwhelming Odds,” he said. “Although the recording was not the best, it was us playing our great songs.”

George, who now lives in Shoreline, Washington, tried to track down his former band mates a few years ago but didn’t have any success. When Kent Stucky, then vice president for alumni and development, contacted George while in Seattle earlier this year, George asked Kent if he could help him track down Jack, his former roommate.

Nancy Roberts, assistant to the vice president for development, was able to find Jack and the rest of the group.

“Out of nowhere sometime around May I received a phone call from Nancy from the alumni office asking if I was a member of the Overwhelming Odds. She said they wanted to have a reunion and wanted my permission to release my contact info,” John said. “I was so touched my wife caught me with a tear in my eye.”

However, there was one bump in the road.

“In the discovery process we got word that Doug had passed on. Everyone was bummed. A few weeks later we found that some file was incorrect,” Paul said. “Doug and I discovered at the reunion that we have been living within 20-25 miles of each other since 1998.”

“Our reunion this past June was a bucket list item for me, especially since we had all members present, still alive and kicking,” George said. “This was a hiatus of 50 years where we had not seen or spoken to each other.”

The group reunited June 17 at Trine, touring the campus and later going to Tom’s house on nearby Lake James to play and sing their old songs.

“Everyone was clearly recognizable, even though everyone changed so much,” John said. “There were familiar mannerisms, laughs, smiles, voices etc. The weekend was a blast and there was never a dull moment or a lull in the conversation.”

“It was great seeing everyone again,” Jack said. “It was wonderful to witness everyone enjoying life with great families. It’s a special moment I’ll always remember.”

“We are talking about another reunion where we get together and do a complete redo of the Overwhelming Odds,” John said. “I am looking very forward to that happening.”