More than 200 gather for Take Back the Night 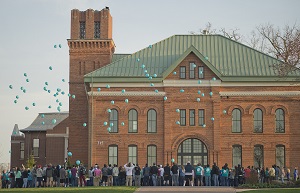 Jama Smith, director of resource development for the Allen County Salvation Army, as well as a social worker and program director, speaks during Trine University’s Take Back the Night observance Wednesday, April 12, in front of C.W. Sponsel Hall. Smith emerged as a survivor of rape and sexual assault in September 2015 after 20 years of silence. Angola Mayor Richard Hickman is seated to her right. More than 200 students and community members took part in the event, which observed Sexual Assault Awareness Month and included a march to Monument Circle as well as a vigil and balloon launch in support and honor of victims’ rights. 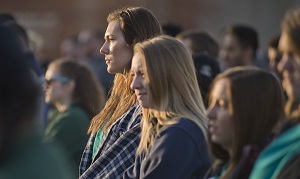