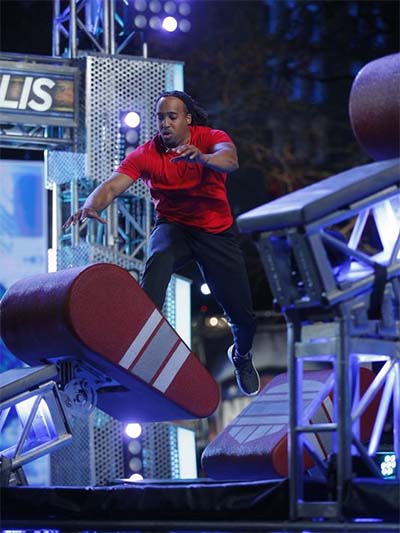 Though he didn’t advance to the finals in his first American Ninja Warrior competition, Mario Brown plans to keep trying – not just for himself, but to set an example for others.

“My favorite part of the experience was just seeing how much I was able to inspire and motivate some of the youth within my community, along with my godson, nephews, brothers and cousins,” he said.

Brown, a 2012 marketing and finance graduate from Trine University, was among 120 who competed at the show’s Indianapolis regional in April, for an episode that aired June 18. He placed 22nd, with the top 15 advancing to the finals in Las Vegas.

No stranger to conditioning thanks to four years of football at Trine and two years in the Polish American Football League, Brown has developed his own unique workout regimen to keep in shape, and stepped up his game for American Ninja Warrior. He posts videos of his workouts on his Facebook and Instagram pages.

“My workout plan pretty much consists of doing whatever type of workout I can find — as unique and insane as possible,” he said. “These workouts usually include a lot of bar work and grip strength-type exercises.”

Unfortunately, his home of Battle Creek, Michigan, doesn’t have a gym with obstacles suitable for American Ninja Warrior training, so Brown traveled once a week to the Classic City Center in Waterloo, Indiana, to train on that facility’s ninja warrior course. However, it became more difficult to make the trip when a new baby arrived in March.

“Playgrounds and parks kind of became my workout facility,” he said. “Unfortunately, I don’t get to work on a lot of the technical aspects of the sport, but I definitely have the strength and stamina to compete.”

Balancing training with family life and his work as a financial service representative can be a challenge, and Brown said he typically wakes up at 5 a.m. and doesn’t get to bed until after midnight.

“I rest when I can,” he said. “Other than that, making sure my diet is on point and staying well organized has been key for me.”

He ultimately hopes to open a ninja warrior-style gym in Battle Creek. In the meantime, he wants to improve in the sport and eventually make it to the national competition.

“My next opportunity will be next year, so I have time to really practice on the technical aspects and come back stronger and better, ready to shock the world,” he said.