With more than 6,000 in attendance to celebrate their accomplishments, members of the Trine University Class of 2018 were urged to “think big” by commencement speaker Benjamin S. Carson Sr., M.D., Secretary of the U.S. Department of Housing and Urban Development.

About 660 graduates out of a class of more than 900 participated in the university’s 133rd commencement ceremony, held Saturday, May 5, in the Keith E. Busse/Steel Dynamics Inc. Athletic and Recreation Center.

Carson said he considered it a great honor to be forever linked to the Trine University through the honorary degree he was presented. He told the graduating seniors that struggles lie ahead in their lives, and it is important for them decide now how to deal with them.

“The only way really to do that is to decide, right here and now, that you can handle anything life throws at you, and you will carry with perspective, determination and faith what is needed to achieve full freedom and lasting success,” he said.

He also said to resist pressure to give up, sharing that an academic advisor had told him to drop out of medical school after he performed badly on his first set of comprehensive exams. After examining his learning style, Carson was able to turn his performance around by focusing more on gaining knowledge through reading.

“There are so many people who are just negative, negative, negative,” he said. “They can always tell you why something can’t work, but they never seem to be able to tell you why things can work. Please don’t be one of those people. You all are going to have significant spheres of influence, and using those in a positive way will make a tremendous difference for our nation.”

Carson then shared his philosophy for life, which he summed up in the acronym “THiNK BIG”:

After the graduates were awarded their diplomas, Lucy Sare, recipient of the Robert B. Stewart Award for the Class of 2018, urged her classmates to avoid falling into the trap of becoming fixated on achievement, or getting “caught in a routine waiting for the next life-changing moment.”

“If we continue to measure our happiness based on our accomplishments, we are going to be disappointed a lot. And if we sit around waiting for happiness to find us, it won’t,” she said. “Happiness is something that must be created separate from our goals and standards.”

She shared three hopes for the Class of 2018: that graduates not get distracted from the joys of the present day, that they remain resilient when they encounter struggles, and that they look for opportunities to show love and care for others.

“To finish off my hopes for us as graduates, I hope we remain happy,” she said. “Not through checking off our checklist of accomplishments but through being present, being resilient and loving other people.”

In his closing remarks, Trine University President Earl D. Brooks II, Ph.D., told graduates they are now faced “with the awesome responsibility of making choices that will determine the person you are to become.”

“Make those choices wisely,” he encouraged. “Continue to listen to the counsel of those whose lives illustrate success and harmony with humanity and the world around you. Conversely, don’t be afraid to stand alone. Believe in what you’ve cultivated in yourself, your ideals, your standards and your innate feelings of right and wrong, good and bad. Take charge of yourself and build your own successes.” 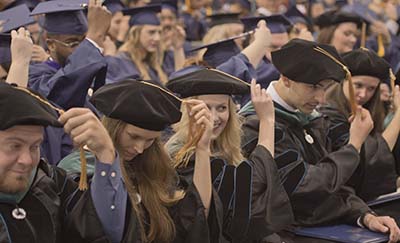 Trine University graduates turn their tassels, signifying the completion of their degrees. 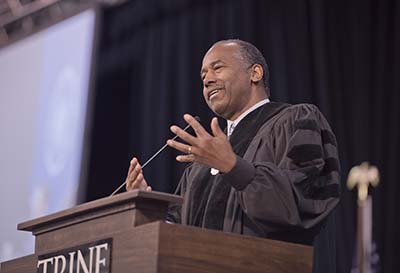 Benjamin Carson, M.D., Secretary of the U.S. Department of Housing and Urban Development, gestures as he speaks during Trine University's commencement. 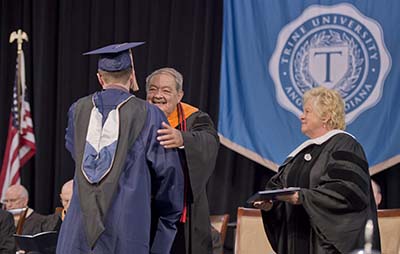 Alec Trine is congratulated by his grandparents, Drs. Ralph D. and Sheri G. Trine, upon receiving his Master of Business Administration degree during Trine University commencement. 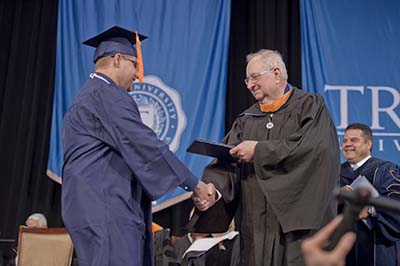 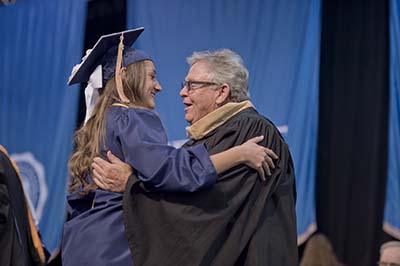 Christina Brinkmann gets a hug from her family friend, Cliff Ryan, after receiving her degree.
©