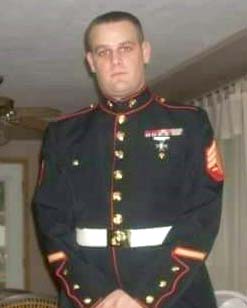 Corey Smith originally joined the United States Marine Corps in search of a better life. Once he graduates from Trine University, he hopes to help students find a better life, as well.

A social studies education major at Trine, Smith, of Wolcottville, Indiana, served in the United States Marine Corps from 2004-2012. He said he enlisted on the advice of his recruiter, a family friend, to do something better for himself and his family.

“I did not want to have a factory job for the rest of my life,” he said.

His duties while enlisted involved working with fuel. While deployed in 2007 on a Marine Expeditionary unit with the Navy, he helped set up refuel points for helicopters and jets on the ship.

He eventually decided to enroll at Trine, where his sister also attended, after hearing great things about how the school works with veterans. He said he decided on an education degree because he enjoys coaching and teaching kids, and he enjoys all types of history.

“The experience of going to different countries will help,” he said. “I am able to say I have visited the countries we will study.”

Now 10 years out of high school, he said keeping everything in balance can be a challenge.

“Sometimes it is hard because I have so much going on in life,” he said. “I attend school full-time, work part-time and I also have two children, but I make it work.”

“Even though I got out of the military in 2012, there are times I do miss it,” he said. “I miss the camaraderie we had. I made quite a few friends from all over the country. But I’m glad to be where I am at now.”