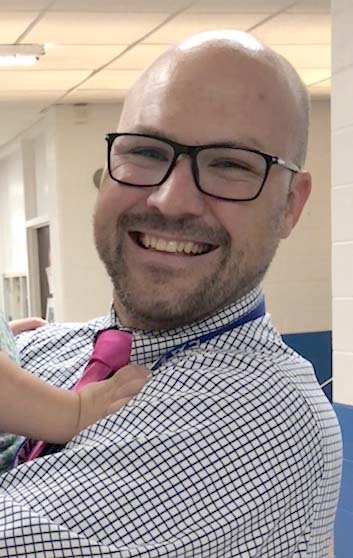 Some 1,000 miles away from Trine University and where he grew up, David Armstrong found his home.

Like many students, the graduate of Spencer, Indiana’s Owen Valley High School was drawn to then-Tri-State by its close-knit atmosphere.

“I had been accepted to IU and Purdue, but the campuses didn’t resonate with me the way Tri-State's did,” he said. “I set foot on campus and felt at home immediately.”

He arrived as a science education major, knowing he always wanted to become a teacher.

“I don’t know if it is because my grandmother taught, so it is a genetic thing, or what,” he said. “I enjoy working with people, and what profession allows a person to work with more people than teaching?”

However, he realized quickly that “chemistry and I were not friends.” Instead, with a longtime interest in reading and writing, he changed his major to English education.

Graduating in 2005, his job search included sending out letters, resumes and registering on websites. Las Animas School District found him on TeachinColorado.com.

“I chose Colorado because they were the only ones that called me back,” he laughed.

Though the move westward may have been made out of necessity, Armstrong flourished in his new surroundings. His teaching career has earned recognition and he recently was elected to the Las Animas city council.

He has used his English skills not only in the classroom, but to write about the high school’s sports for the local paper and announce home football games. He earned his master’s degree in rhetoric and composition from Colorado State University at Pueblo, with former TSU professor Dennis Petrie providing one of his letters of recommendation. He also has enjoyed the outdoor adventures the area offers.

“I have been able to take advantage of the tremendous outdoor community here as a white water rafting guide and rock climbing guide for several summers,” he said.

Located in the southeast corner of Colorado, Las Animas High School serves a community of about 2,000. The area struggles with poverty, with 80 percent of students receiving free and reduced lunches, but Armstrong said, “It is a quaint community. I am proud to call it home.”

To help his students broaden their perspectives, Armstrong leads educational trips every two years to destinations across the United States and around the world. The next trip is planned for June 2020, with stops in Italy, Germany and the Czech Republic, and Armstrong encouraged anyone who would like to support the effort to contact him at david.armstrong@la-schools.net.

“Some of my best memories come from these trips,” he said. “Students' first time on airplanes and subways make for great pictures and Snapchat videos. If alumni would be willing to donate to my students' experiences, that would be great!”

In 2017 he was honored by the Boettcher Foundation, which provides full-tuition scholarships to Colorado students to attend the Colorado college or university of their choice. Students selected for the award can nominate the teacher who impacted them the most to receive a $1,000 grant to be used toward an educational program or project at his or her school.

He also received the Citizen of the Year award from the committee that oversees the annual school festival, the Santa Fe Trail Day. The longest-running school-sponsored activity in the nation, the event will mark its 85th celebration in April 2019.

“Being recognized like this is a true blessing,” Armstrong said. “When I was student teaching at Fremont High School under Joe Camp, he told me that as a teacher we all hit a lull where we wonder if what we are doing is really making a difference. When you're in the midst of that lull something will happen to help you realize what you’re doing really does have a positive impact on the community and on students. The recognition I received this from the Boettcher Foundation and from the Sante Fe Trail Day Committee did that.”

He said his city council bid came after several public officials, including the mayor, asked him to run, feeling he could make a positive impact on the community.

“It has been interesting to see the city in this light,” he said. “I enjoy it and hope to continue serving after my term is up.”

With his extensive school and community involvement and his home and family in Las Animas, Armstrong said he hopes to continue and perhaps finish his career there. But that doesn’t mean all traces of Indiana have disappeared from his life.

“I am a lone Colt fan in Bronco country,” he said. “My students always managed to ‘decorate’ my room before the Colts played the Broncos, even so far as sneaking in front of my house and decorating my car. I am happy to say, however, that every time they played and I got ransacked, the Colts beat the Broncos. The students were so disappointed. I proudly wore my Colts tie the next day and just smiled. It was great.”