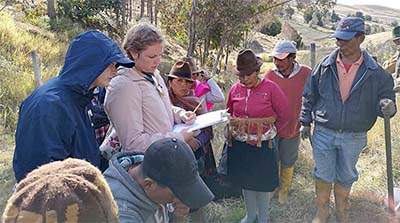 A team of five Trine University engineering students along with Tim Tyler, Ph.D., professor in the Reiners Department of Civil and Environmental Engineering, made a follow-up trip to a remote Ecuadorian village in September to help improve its water system.

From Sept. 16-23, the group from Trine’s Engineers Without Borders (EWB) chapter helped survey the existing pipe system and locate additional springs in Comuna Guangaje, a community of about 400 indigenous people, mostly poor farmers.

The trip followed up a visit by another group of EWB students with Tyler a year earlier. The original group surveyed the existing springs and structures, interviewed residents about their water usage and tested water for bacteria.

Currently, water is supplied by springs above the village that flows by gravity to tanks, and then by pipes to individual homes. The water is not treated and must be boiled to drink, and often the springs dry up during the region’s dry season.

“During these times, the people collect water from shallow creeks and carry it back to their homes,” said Tyler. “Surface water like this is subject to contamination and is much less safe than spring water.” 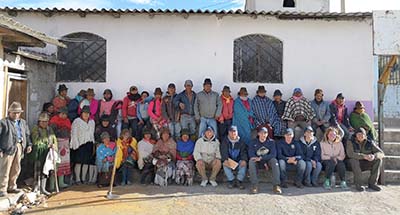 The group worked under the leadership of Roger Ward from the Indianapolis Professional Chapter of EWB, which is partnering with Trine’s organization on the project. Spanish interpreters also accompanied the group to facilitate communication with the villagers.

“I decided to go because I enjoy trips that involve helping others, and I like to travel in general,” said Horan. “I had been to Jamaica and Haiti prior to this trip to help people, and I absolutely loved the experience.”

The team spent the first day in Quito to get adjusted to the environment.

“I could feel the 9,000-foot altitude when I carried my suitcases up five flights of stairs in our hotel,” said Miller.

While at the village, the group also experienced the relatively primitive conditions in which their hosts live.

“I will probably never forget showering every night in the outhouse with ice cold water, wind blowing and the temp in the 20s to 30s,” said Horan. “Let's just say I froze at night.”

The group performed a survey of the existing pipe system, noting how much water was flowing into the storage tanks and checking for leaks.

“It was really cool to see the locals take charge and use huge hoe-like tools to move massive amounts of dirt,” said Horan.

They also located another spring source, and constructed a temporary flow measuring device to determine how much water the village could get from it. Tyler said the data indicated the new source could double the current flow rate into one of the large storage tanks.

The group also determined additional springs could be tapped into to provide additional water for the community.

“I was glad that I could make some difference in their lives,” Miller said. “This experience is unlike any other I've ever had and it has hopefully pushed me to be a better person and engineer.”

“It feels great helping people with something just as simple as water,” said Horan. “Roughing it in a sleeping bag in the Andes Mountains was totally worth it and I will do it again if I get the chance.”

Tyler said the students will work with others in Trine’s EWB chapter to complete a final design for the village’s water system this spring. Another trip is planned for September 2019 to construct spring boxes that will capture more water for the community.

The Trine student chapter is developing multiple fundraising events to help pay for materials. Donations can be sent to Engineers Without Borders, c/o Trine University.