TSC grad nears half a century in the sky

Jack Hunt BSBA 1973 says his education and career path have taken many twists and turns, ultimately taking him to his true passion: piloting aircraft.

Hunt grew up watching television shows like Sky King and Whirlybirds, and hearing stories his father, a private pilot, repeatedly told about his flying days.

He entered Tri-State College in 1968 as an electrical engineering major. After his freshman year, his father asked Jack and his brother if they would like to learn to fly, and the trio spent the summer learning to fly a Cessna 150 off a grass strip in Northfield, Ohio.

Returning to Tri-State in the fall of 1969, Hunt discovered Tri-State’s flying club and met Bill Eyster, owner of the Tri-State Steuben County Airport.

“He was a dictator who demanded perfection from all who worked for him,” Hunt recalled. “He became like a father to us all.”

In those days, flying club members could fly a Cessna 150 for $6 per hour, or a Cessna 172 for $8 per hour. Hunt spend so much time at the airport that his grades began to suffer.

“What was worse, my father asked me not to fly, period,” Hunt said. “My mother supported me, but we said nothing to my father.”

During his junior year he switched his major to business administration. By the time he graduated, he had served as president of the Flying Thunderbirds, president of the TSC Amateur Radio Club and a flight instructor.

“I had the pleasure of teaching a lot of students attending Tri-State College how to fly,” he recalled. “On graduation my father learned of my flying, and he was proud.”

After graduation in 1973, he went to work for United Companies Life Insurance as an agent.

“The economy was beginning to tank, but I knew a lot of folks in Angola from flying and sold insurance policies left and right,” he said.

He was promoted to regional manager and then was sent to Georgia as state manager. At age 25, he was making great money, but felt drawn elsewhere.

“My heart and eyes looked skyward to every plane that flew overhead,” he said.

He gave up insurance in 1976 to go back to aviation, where his career path included “flight instructing, flying night cargo, flying charters, getting a jet rating and bouncing back and forth between Ohio and Georgia.”

He eventually became chief pilot for West Building Materials in Atlanta. In 1990, he started flying part-time for Royal Oak Enterprises, one of the world’s largest charcoal companies. He was hired full-time at Royal Oak in 1992.

In 2010, he told his wife Anita that he would like to have his own aircraft.

“After a search, we ended up building an aircraft in our garage,” he said. “After two years, nine months, 28 days, our aircraft was ready to take to the air: a Van’s RV7.”

Now an aircraft owner, he hoped to put the plane to use for the Angel Flight Soars charity, which arranges free transportation for people who need to travel for lifesaving medical treatment, but lack the means to pay. Unfortunately, the organization didn’t allow experimental aircraft like the RV7 to conduct flights at the time.

However, in 2015 Hunt met representatives from the organization at an Aircraft Owners and Pilot Association gathering in Beaufort, North Carolina, and was told the rules had been changed to allow experimental aircraft as long as they met Instrument flight rules. He signed up the next day.

“The joys you receive from helping others like this cannot be expressed,” he said. “I am so grateful that the Lord has answered my prayer to help, along with hundreds of other pilots who donate their time and finances to fly the patients.”

Hunt encourages anyone interested in the organization, which organizes some 2,700 flights each year, to visit angelflightsoars.org.

Nearing 50 years in the air, Hunt enjoys helping others through Angel Flight Soars and operating his own hearing aid business. His time at Tri-State played a large part in helping him achieve his goals.

“Tri-State College gave me the ability to study, learn and do anything you want and succeed,” he said. 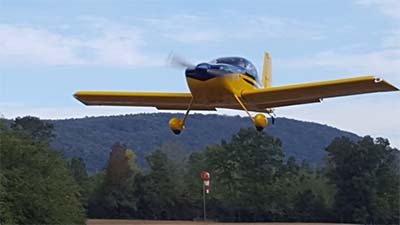 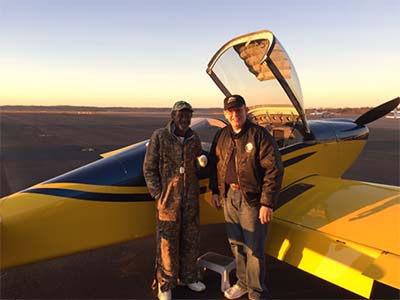