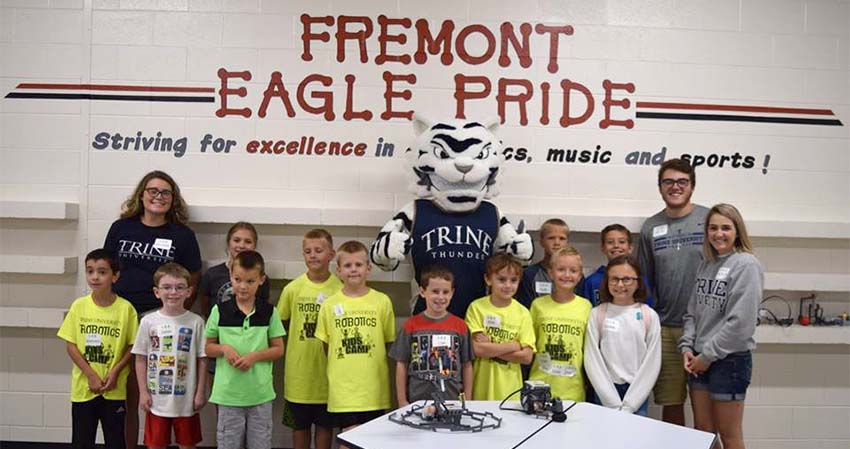 Freshmen Cal Stone of Wabash and Emily Morthorst and Brookeanne Hensley of Fort Wayne directed the camps this past summer, which expanded to offerings at McKenney-Harrison Elementary School in Auburn and Fremont Middle School in Fremont as well as on the Trine campus.

The Trine students began with materials from past years’ LEGO camps, including parts for building robots and introductory manuals. They sought out other resources that allowed them to teach campers how to build a wider range of robots targeted to varying levels of ability.

They also had use of about a dozen Trine University laptops that campers used for programming and accessing instructions.

The team used their materials to develop the camp curriculum. They learned to be flexible as they adapted activities to allow for campers’ strengths and interests.

“We were able to take each camp one by one,” said Stone. “We were able to build simpler robots with our morning beginner camps, and then upped the difficulty in the afternoon with our advanced camp. Each week was different when it came to overall abilities, but we were able to find fun and challenging robots that all campers were able to enjoy.”

Marcus Wagner, principal at McKenney-Harrison, said the Trine students did a “fantastic” job working with the children.

All the LEGO camps had full enrollment.

“We had a great turnout,” Morthorst said. “The robots that were built were fairly complex, and many of the parents were in awe when they got to see what their child built on the last day.”

Wagner said his school is looking forward to continuing the partnership with Trine next year.

The university is planning to expand the camps into more schools next summer. For more information about LEGO Robotics camps, contact Karen Morthorst at morthorstk@trine.edu.