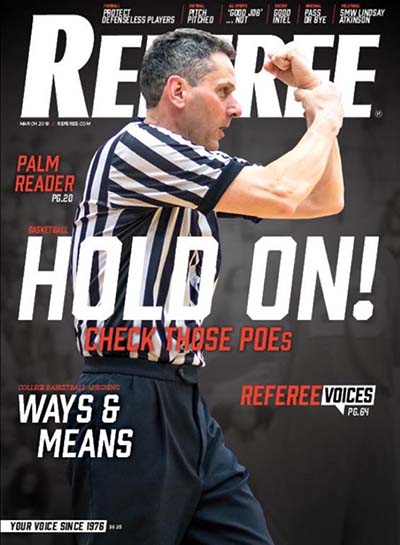 Kevin Smith, an adjunct faculty member in the Department of Criminal Justice, Psychology & Social Services, is featured on the cover of the March issue of Referee magazine. Smith said he has been officiating basketball at the college level for 16 years and has officiated the NCAA Division III national tournament four times. He has been one of only 12 officials for the NAIA Division II national tournament for the past two years and will work the tournament for his third and final time beginning March 7 in Sioux Falls, South Dakota.

“The photo was apparently sent in by one of their freelance people in Michigan and is of me officiating at a men’s college game there,” he said. “I was told the photo was chosen because it went with their theme in this edition of ‘Hold On’ Officiating POEs, which stands for points of emphasis. I appreciate their putting me on the cover and the bio they put inside the cover about me.”