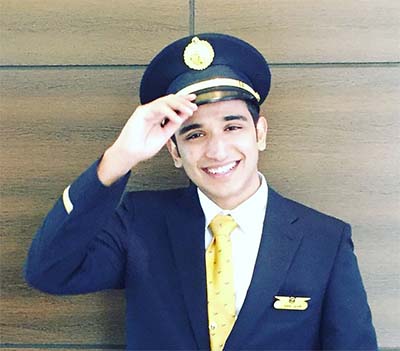 A desire to travel the world brought Tariq Alanazi to Trine University, and a similar desire is leading him on a new career path.

“I always wanted to travel the world and learn new things about culture, languages, religions and, most importantly, food,” said the 2017 graduate.

After earning his degree from Trine, Alanazi, an informatics major with a minor in business administration, returned to Saudi Arabia to work with an information technology company as a developer and manage the business department. However, he quickly discovered the work wasn’t what he wanted.

“I didn’t feel like sitting on my desk from 8 in the morning until 6 p.m. every day,” he said.

In the meantime, he saw an ad seeking cabin crew members for Saudia, the national carrier airline for Saudi Arabia, with the opportunity to study aviation in Florida for students who had a bachelor’s degree in some area of science. Alanazi applied, then passed the required English exam.

“The process took about five or six months because we had to do interviews and medical examinations,” he said.

He also passed two months of training at the Prince Sultan Aviation Academy in Jeddah, Saudi Arabia, at the top of his class.

“For now I’m in cabin crew and I’ve got the ability to go to Florida if my file is clean and some other requirements,” he said. “I hope that I’ll be one of the crew who will get the chance to study aviation in Florida to become a pilot, as well as to be qualified for all the planes, like the Boeing 777 and 787, and the Airbus a320 and a330.”

As he gets established in his aviation career and continues to travel, Alanazi’s future goals include learning new languages like Spanish and French.

“The most important thing is to settle down and have a family like in the American dream, but with a cat, not a dog,” he laughed.