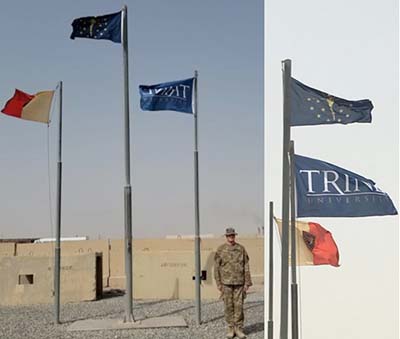 CAMP ARIFJAN, Kuwait – One of the features that originally drew Mike Thompson to Trine University’s Lou Holtz Master of Science in Leadership program was the flexibility of online classes.

That flexibility became very important to Thompson when, halfway through the program, he was called to active duty by the U.S. Army and deployed to Kuwait.

A member of the Army and Indiana National Guard for 26 years altogether, Thompson, who holds the rank of staff sergeant, has been able to continue working on his MSL while deployed, completing two classes from Camp Arifjan in Kuwait.

“My daily schedule is mostly working in an office environment, and fairly routine,” he said. “The military allows me downtime at night to work on my courses in my barracks. The USO and barracks both have Wi-Fi to use my laptop, which helps. The ease of taking online courses gives me the time to work on my schoolwork outside of daily missions for the military.”

He said the biggest challenge is when his duties take him to other countries, where Wi-Fi signal strength varies. He said does his best to log in, write papers and submit assignments ahead of due dates while he has sufficient Wi-Fi.

“We are seven hours ahead of the USA, so time zones and submissions are not a problem, as I am usually early,” he said.

Thompson originally served with the Army at Fort Bragg, North Carolina, with the 82nd Airborne Division as a paratrooper for four years. He then joined the National Guard in Indianapolis, and has since been deployed to Camp Atterbury Indiana, twice to Camp Arifjan, and into Iraq.

His home unit, the HHC 38th Sustainment Brigade, is based in Kokomo.

Before he was called back to active duty, Thompson worked for the State of Indiana as the state veteran program director for the Department of Workforce Development. His job was to administer the U.S. Department of Labor's Jobs for Veterans State Grant (JVSG), which provides veteran representatives who give career, resume and interview services to veterans seeking to find employment.

In that position, he leads a team of 40 veteran representatives throughout the state. It was his interest in leadership that initially drew him to Trine’s MSL program.

“As a leader in the Army and civilian world, I wanted to learn techniques to further my leadership knowledge and strategic concepts,” he said.

Thompson said he also appreciated the flexibility the program offered him as a working adult — which is now even more important — and said he always has been a Lou Holtz fan, “especially while he was the football coach at Notre Dame.”

“I had personally met Mr. Holtz when I was guarding the Georgia Dome during the 1996 Olympics,” he said. “He is a humble and inspirational leader.”

Thompson said he has been able to apply what he has learned in the MSL program while deployed.

“First, I have learned to analyze a situation and improve an organization through a process,” he said. “The Army had given me formal and informal training on leadership, but the Trine MSL allowed me to give it a name and steps to format it. Second, I have learned how to take these leadership tools and provide a better climate for my troops and superiors. When a complex situation goes wrong, I can step back, use what I have learned, and provide a detailed solution for others to understand and follow. Finally, the officers in my unit know that I am a master's program student and use my knowledge and skills to fix situations between individuals or units, therefore maximizing mission output.”

Thompson plans to return to the United States in November and return to work with the State of Indiana in January once his paid leave is exhausted. Until that time, he will enjoy some down time with his wife and new son, who will be born in August.

He plans to complete his MSL in May 2019, then retire from the military and “begin the final career phases of my life.”

“I hope to promote up further in state government or possibly switch over to federal service, helping veterans,” said. “Along with that service to others, I will begin to teach somewhere at the collegiate level. Finally, I plan on running for some time of political office, helping others in my community.”

He said he is very proud of Trine University and all that the MSL program has provided him.

“I talk about the MSL program to my soldiers and peers, and how it can benefit their organization and career,” he said. “It seems a lot of my peers pursue graduate programs based upon what elective they discovered they had a passion for during their undergraduate programs. I chose the Master of Science in Leadership because it will give me the platform to be a servant leader.”