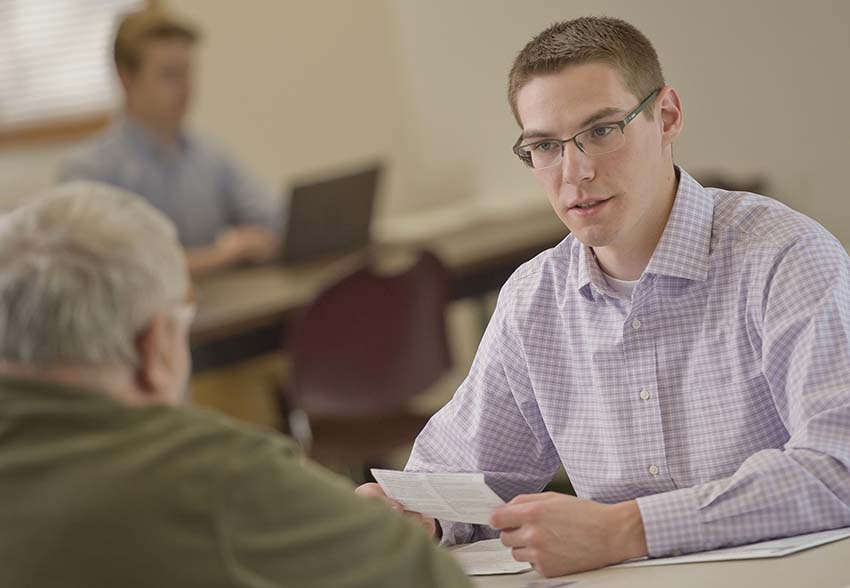 Mention the word “taxes” and the phrase “win-win” would rarely come to mind for most people.

Holbrook is one of five students in the university’s MGT 493 Voluntary Income Tax Assistance class this semester. Each Wednesday through April 11, the students work from 3:30-6:30 p.m. in the Carnegie Public Library of Steuben County to complete tax forms for residents with annual income of $54,000 and below.

The Trine class is operating as an Angola branch of the Voluntary Income Tax Assistance (VITA) program offered by Catholic Charities. VITA served more than 1,000 Steuben County residents last year, the eighth year of the program, according to Terri Hull of Catholic Charities.

“We have a lot of people who work and can’t come during the day who will come over here, so it’s a lot more convenient to them,” she said.

The class is the brainchild of Jeff McGowan, assistant professor in Trine University’s Ketner School of Business. McGowan served in VITA programs while working on his undergraduate degree and MBA.

“After graduating, when they requested CPA assistance at a site location, for many years I offered my services to answer ‘tougher’ questions,” he said.

When McGowan came to Trine, he started working to bring the program to the university as a way to provide practical experience to students while helping community members.

“I saw what a great program it was for my undergrad/grad university, and hoped to be able to bring it Trine,” he said.

Over the first four sessions of the class, the students worked to earn certification so they could participate as “advanced” preparers for VITA, a national program administered by the Internal Revenue Service. Once certified, they began offering sessions at the library in February.

The Trine students meet with clients and input their information into software, which is reviewed by McGowan and sent to Catholic Charities for electronic filing.

“The first week we were here everybody was really nervous. We didn’t know what to expect,” said Colin Galloway, a senior from Reading, Michigan. “But thanks to the courses we’ve taken at Trine and the experience we’ve had previously, we all felt much more comfortable after meeting our first client. After that, the atmosphere became much more relaxed.”

McGowan said the group assisted 60 residents with taxes over their first five weeks, and he hopes to serve more than 100 total before April 15.

“In addition to giving back to community, it is a real learning process for the students in having to think on their feet quickly, dealing with people’s confidential information and learning how to inquire deeper into some areas where the client needs to give more detail,” he said.

Brian LeGalley, a senior from Bowling Green, Ohio, said the opportunity to take what he has learned in his Trine classes and use it to help people drew him to the program.

“It’s trying to relate some of the problems we had in class and then seeing them in a different light with real people and real numbers,” he said.

“Each client is different in their own way, and it’s good because we get to see taxes from a variety of standpoints,” said Ethan Kirkman, a senior from Oregon, Ohio. Kirkman and Galloway, who both already had 18 credit hours, are taking the class as volunteers rather than for course credit.

Senior Kayla Spande, from Mapleton, Minnesota, said the class gives her the opportunity to try a branch of accounting she won’t experience in her planned career of corporate finance and accounting.

“I’ve really enjoyed getting to meet a lot of people from the Angola area who remember when different buildings around town were different things, long before I ever came to Angola,” she said. “It’s cool to get to know them on a personal level while helping with something they need help with.”

Though clients don’t always enjoy the tax process, the students said they get mostly positive feedback.

“They are really impressed that in spite of how young we are, we appear to know what we’re doing,” LeGalley said.

In addition to assisting local residents and helping the Trine students develop and practice their skills, Hull said the VITA program provides an economic benefit to the community.