9/11 distinguished speaker looks back, ahead 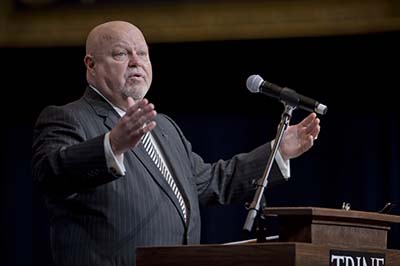 Looking back at the events of 9/11 and ahead to the future, Rear Adm. Edward “Sonny” Masso (USN Ret.) shared both his experiences as a Pentagon officer on that day and the challenges the nation faces in an era of rapidly evolving technology.

Trine University’s annual 9/11 remembrance, opening the Distinguished Speaker Series for the school year, welcomed students, staff and members of the community to campus to hear Masso’s reflections and to remember those who died in the Sept. 11, 2001, terrorist attacks.

The crowd filled nearly every seat in the Ryan Concert Hall.

“This day and the events that took place indelibly shaped our great nation, defined a generation and a way of life,” said Earl D. Brooks II, Ph.D., Trine University president, in welcoming those in attendance. “It’s fitting that we gather together this morning to remain committed to informing our young people about that impactful day, but also to honor the memory of those lost along with their family, their friends and a nation that still grieves.”

Following the presentation of the colors by Trine University ROTC and the singing of the National Anthem by the University Choir, the audience observed a moment of silence in memory of those who died in the 9/11 attacks and the subsequent war on terrorism. Masso then opened his presentation by thanking the university for the welcome he received, saying he was part of the Trine family now.

“Just by you recognizing the sacrifices made by so many wearing the cloth of our nation speaks volumes about Trine University’s ethos of service and support,” he said.

Drawing from his current work in cybersecurity, Masso commended Dr. Brooks for past remarks on the need for change in education, asserting that, “We must be flexible. We must be open-minded to deal with technology and how it redefines premises of science.”

Within five years, he said, “We’ll be in a world of machine learning and artificial intelligence, with tools run over quantum computers over 5G networks using biometric identification and authentication of user protocols – no more passwords – using blockchain and other collaborative tools, changing the way we go to the marketplace.”

He then turned to his memories of 9/11, saying he avoided talking about the attacks until 2014, when he found most seventh-graders he spoke to in history classes at a middle school in Henderson, Nevada, had never even heard of 9/11.

“I knew then that if I was ever provided an opportunity to speak about 9/11 again, I would jump on it, If only to memorialize those who died that day in the Pentagon, New York City and Shanksville, Pennsylvania,” he said.

A captain on Sept. 11, 2001, Masso said his job was to command the Chief of Naval Operations’ and Secretary of the Navy’s command center at the Pentagon, which was tasked with dispatching orders from the Navy’s top leadership to combatant commanders. Sitting at his desk in nearby Crystal City  when he heard news of the attacks over the radio, he drove to the Pentagon to meet with the Chief of Naval Operations staff action officer.

He was at the top of an escalator, just above the Command Center, when American Airlines Flight 77 hit the Pentagon.

“I thought at first it was a bomb,” recalled. “The earthquake-like jolt was unlike anything I’d ever felt before. The entire Pentagon shook, the lights went out, and the escalator went off track.”

Hurrying down and ignoring a loudspeaker announcement to evacuate the building, he sought out the outer access door for the command center, only to find it white-hot. He heard loud cries and turned behind him, moving material to allow seven women trapped in a restroom to escape.

He said the aftermath engaged all his senses: smell from the smoke and fire, the sight of “horrific destruction and death and profound injury to people in some cases I had known for over 25 years,” touch as people jumped from higher floors into his arms, and the taste of the overwhelming aroma of the smoke that permeated his mouth and throat.

“But the sound was the most egregious of the sensations,” he recalled, “as the cries of the injured from within the inner depths of the space … tortured me by giving me a sense of helplessness when my dear friends, shipmates and colleagues were in peril and were trapped in an inferno of destruction that I could not rescue them from.”

He and other personnel did manage to rescue about a dozen from the flames, including a petty officer who came out of the fire.

“For a brief moment, death was defeated, and for one tender mercy, I will always be profoundly grateful,” he said.

He said he thinks every day about his own staff, those who died in the Twin Towers, and the firefighters who went into those buildings.

“It’s extraordinary the bravery that occurred on 9/11 from underpaid, underappreciated public servants who every day put their lives on the line,” he said.

“I visit the graves of most of the decedents from the Command Center a few times every year. I love those people so much. … God bless you all, God bless the souls of the departed victims of 9/11, and God bless America.”

During an extensive question-and-answer session that followed his presentation, Masso was asked how he deals with the loss of his comrades on 9/11.

Asked how the nation itself can best honor the memory of those who died in the attacks, Masso recalled the days immediately after 9/11 when “we were of one mind in our country.”

“We can stop all of the negativity,” he said. “When the public speaks in the voting booth, we should respect that, and if we don’t like it, go vote differently.”

Asked by a Trine faculty member what educators can do to produce better students, Masso replied that offering information about other cultures and faiths “sets folks free.”

“Our beef is not against the faith of Islam, our beef is against extremists that are terrorists: the Taliban, al-Qaida, ISIS,” he said.

He also said educators need to help students find their moral compass, and suggested the first component of the university’s technology curriculum should be cyber-ethics.

“I think we always need to know what’s right and what’s wrong,” he said.