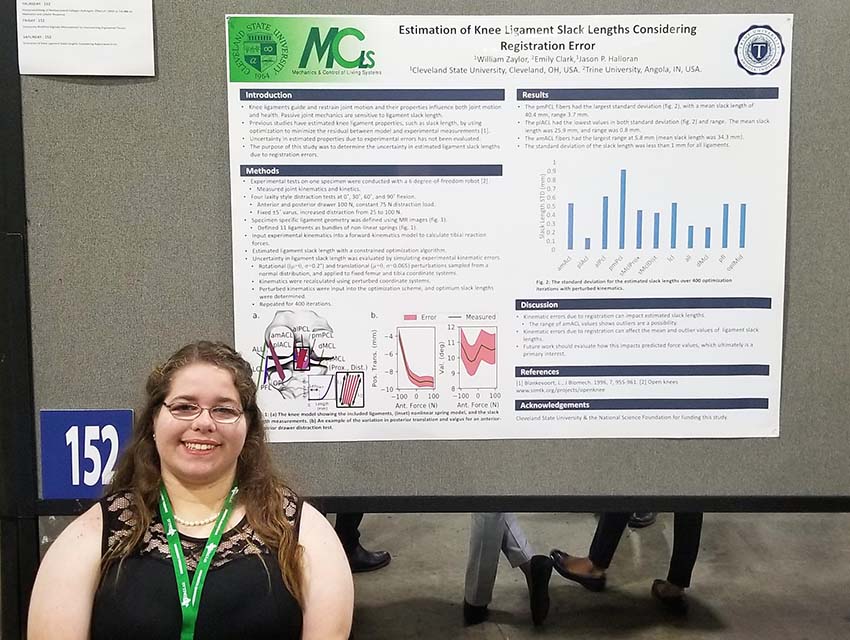 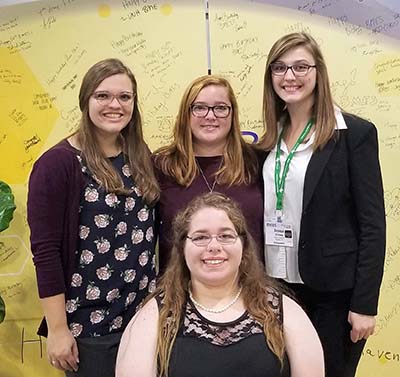 The 50th annual meeting was held Oct. 17-20 at the Georgia World Congress Center in Atlanta. Jessa Crites, a senior from Westfield, Indiana, Erika Kasen, a senior from Hudsonville, Michigan, Allison McCrady, a senior from Lancaster, Ohio, and Emily Clark, a junior from Forest, Ohio, participated in the event.

For her REU, Kasen worked in a computational biomechanics lab and used a MATLAB program to analyze motion capture data to find mechanical results, including knee angles and movements, of chronically injured patients walking with an exoskeleton. The goal of the research is to determine how mechanical concepts can apply to, and affect, the body, she said.

“Exoskeleton walking is on the cutting edge of rehabilitation engineering,” she said.

Clark worked as a rehabilitation engineering research Intern at Cleveland State University during the summer of 2018. She supported graduate research into the structural response of human knees by coding in the Python programming language to collect and analyze data regarding knee ligament slack lengths due to registration error.

She said the end goal of the research is to improve biomedical devices such as joint implants —specifically for knees — and the surgical implantation procedures performed by surgeons.

Kasen and McCrady also presented a poster covering their honors project, “Ultrasound-Based Observations of Apparent Achilles Tendon Shortening.” For their project, the duo took ultrasound images to measure strain on the Achilles tendon.

“The results were basically counter-intuitive because you would think as you point your toe the Achilles tendon would lengthen, but we found the opposite,” said McCrady. “The reasons for this are still unclear, and other groups are seeking to determine why this is happening in the body.”

Research in this area hopes to aid in injury prevention, Kasen said.

The students said being able to present at the meeting helped them grow professionally and network with others in the field.

“BMES was a great opportunity to be exposed to many graduate schools, graduate-level research presentations and other exceptional undergraduate peers, and engage in technical dialogue while presenting,” said Kasen.

“It was an honor to present my research,” Clark said. “This opportunity greatly increased my confidence and widened my horizons for my potential and what the future has to offer.”